It took place this year, but with some masked and with fewer judges than usual.

I’m not sure I will do this again, because the peculiarities of post-lockdown meant that I accidentally joined the professional photographers, though I did not have a press pass. The light is so much better from the other side! I doubt I could wing it again. But I will investigate getting a press pass or waving my RPS membership card.

As always, I have difficulties working out who is who. First appears the Lord Chancellor, Dominic Rudd (at least he studied law – Liz Truss wasn’t even capable of attacking the tabloid press on ‘Enemies of the People’), together with the Lord Chief Justice, currently Lord Burnett of Maldon, the most important judge after him, who wears the High Court red but with the extra detail of a train, which here a woman has to carry. There is a man with no apparent function too.

After this come a mixture of both justices of the Supreme Court and the Court of Appeal. There is a certain order of priority. Thus, first come a few in full-bottomed wigs – these are the heads of division. The one in front here is Dame Victoria Sharp, the President of the Queen’s Bench Division:

I read that she had four children in five years and did not take any leave at all, because as a barrister she would only get work if she was present in chambers. This might be one of those children, just a guess. Behind her is probably Sir Geoffrey Vos, the Master of the Rolls, but I am not sure. I am just guessing he would be next.

The mystery is: who is the gentleman in the tricorne hat? I am thinking possibly a Canadian judge, but then why so early in the procession? The umbrella-bearer may be a guest of the man on the left. The UK Parliament website says:

The German Bücherkarton uses a cunning folding system that holds it together without tape. Are other German removal boxes the same?

LATER NOTE: Tom West tweeted me about the existence of banker’s boxes in the USa – and seemingly in the UK too – see following entry.

Contrary to appearances, this blog is not yet dead. However, I did not mention that on 16 April it was 18 years old.

To make up for it, here is a photo I took on April 14 near Fenchurch Street Station.

Some photos from the South Bank.

When I went to the Don McCullin exhition at Tate Britain last Wednesday (includes some photo of the wall going up in East Berlin in 1961 btw), just before midday, I passed the protesters, of whom there seem increasingly more. It was very warm for February.

The image settings seem to have changed – must read up on WordPress in an idle moment.

After some attempts to accost people and ask to photograph them, it seemed more promising to seek protesters who wanted photographs.

The Zimbabwe Vigil takes place every Saturday outside Zimbabwe House – which I remember as Rhodesia House, long boarded up, in the 1960s. The Vigil has been happening since 2002! And there is a book.

I have not been following this. I remember we were very against the Ian Smith régime in the UK and not coming to an agreement with Ian Smith seems to have had devastating consequences.

At Trafalgar Square there was a protest by Sudanese against Omar Al-Bashir.

Elsewhere other things were happening.

I can’t remember if I’ve posted these before. They were taken with a small camera in the Eurotunnel terminus at Folkestone in July 2013. Standing in the queue for coffee I looked up and saw them standing on the canvas roof. Unfortunately maybe the roof has changed, but at all events there is now, or was last time I was there, a fake hawk flying above to frighten the seagulls off.

LATER NOTE: Here is a photo sent to me by Victor Dewsbery – it seemed difficult to add it in a comment. – I meant to mention his useful post on terminology in the construction industry recently but somehow never got round to it 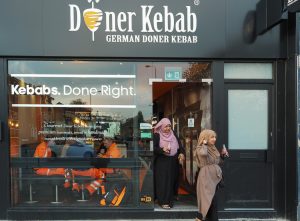 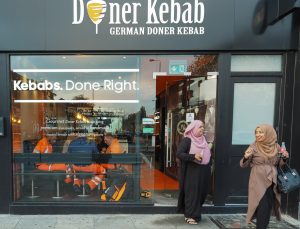 Some impressions of the new Altstadt in Frankfurt am Main following a guided tour on October 22.

Frankfurt’s original old town was the biggest in Germany and consisted of about 1250 medieval and Renaissance timber-framed buildings over an area of 7000 square metres. It was destroyed in air raids in WWII and largely replaced by a 1970s brutalist Technisches Rathaus, administrative buildings, which must have robbed the area of its life. The buildings were eventually bought back by the city and the whole area was ‘rebuilt’ from 2012-2018. The small buildings, alleyways and squares have returned: 15 buildings following the old plans (though no longer 12 families sharing one lavatory) and many others designed in a variety of similar styles. There are shops and restaurants in the lower floors. The area was opened in September 2018 and at the moment is full of groups of tourists like me being led around it.

Here’s a picture of the Technisches Rathaus taken in July 2008 by L. Willms: 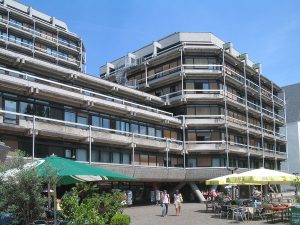 Some impressions of the new buildings:

Four buildings in the street called Markt or Krönungsweg 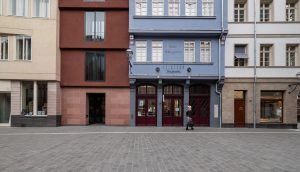 On the left is part of no. 32, Goldene Schachtel, a new building. Then the dark red Altes Kaufhaus, also new. The following two buildings are both reconstructions: the pale blue Würzgarten and the pharmacy Schlegel, which forms the end of the Hühnermarkt.

This is just to show the combination of reconstructed and new buildings. There are better pictures online, For instance, here is the Goldene Schachtel from Matthias Alexander (Hg.): Die Neue Altstadt Frankfurt am Main, Societäts Verlag – playing with the use of overhanging storeys. 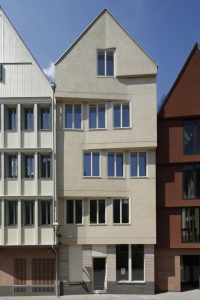 Here is a map of the district on which you can see which building are reconstructions and which are new.

Detail of the Goldene Waage, the most elaborately restored building, to be a café. 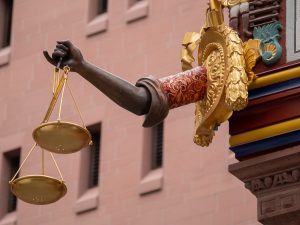 Hühnermarkt with fountain to Friedrich Stoltze, a dialect poet whose museum has not yet opened.

A mysterious text on the house Zur Flechte: 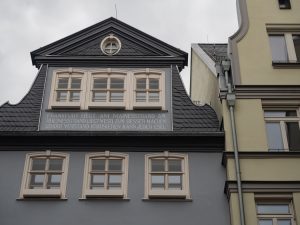 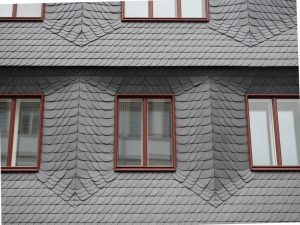 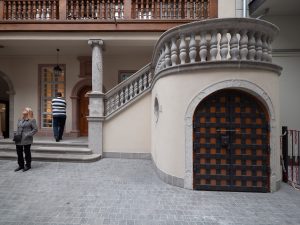 And here is a current screenshot of Google Maps showing building still going on. This has been completed now (although shopkeepers are still doing the final work inside) – Google Maps is obviously a bit out of date, so look forward to the next version. 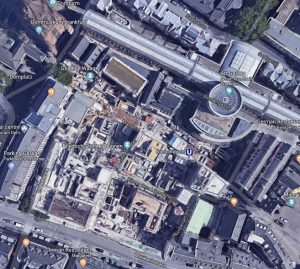