For some reason best know to itself, the local paper had an article comparing criminal procedure throughout Europe on the front of their Magazin section at the weekend (Click to enlarge). 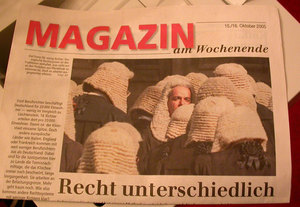 There is it again – that hackneyed old scene of the judges in their ceremonial wigs, probably at the Lord Chancellor’s Breakfast. I’m not sure what it tells us about criminal justice in Europe, though.

The topic of the article is: Germany has a very large proportion of judges, and they are overworked. So how do other countries manage with fewer (professional) judges?

German judges write more (in England you have the oral pronouncement of judgment, backed up by a transcript by a court reporter).

In German courts, it is easiest to use applications/motions to drag out proceedings

2 thoughts on “Criminal procedure in Europa / Strafprozesse in Europa”