The Fürth town museum has moved from Schloss Burgfarnbach to Ottostraße and opened this morning. 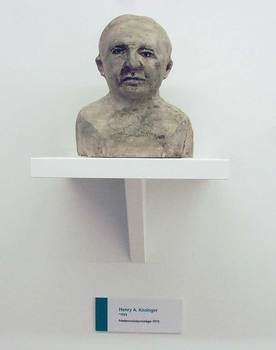 Some of the busts of famous Fürthers were more convincing than this one.
The exhibition is Aus den Hinterhöfen zur Weltspitze. It’s not exactly anything to write home about, but then it’s practically next door.

Mysteriously, the odd English translation of a title appeared, even though the text below (a list of crafts and trades, for example) would need to be translated too. Perhaps this was in the spirit of ‘Just so you know what you’re missing’. I thought the following header:

(capitalization theirs) perhaps conveyed little. But this is carping. It is a nice museum and some of the permanent exhibits are interesting.

Here’s a pane of the Fürth window at the Germanisches Nationalmuseum – note Fürth skyline, Frau Fürth with clover leaf and Frau Nuremberg (with the town wall round its hat) holding the Adler, the first train in Germany.

LATER NOTE: Zonebattler links to the articles in the local paper, and I see the big exhibition is by the Haus der Bayerischen Geschichte – well, I knew that really, but it sounds as if this is just a temporary state of affairs (the exhibition had some good things, but it was hard to read the texts and there was a heavy sense of boredom about the whole thing, very reminiscent of the exhibition on 200 years of Franconia in Bavaria, which I had the misfortune to see last week. The small Fürth permanent exhibition, on the other hand, was put together in only one month by the new director of archives, Sabine Brenner-Wilczek, after someone else dropped out because of illness. And it’s excellent.