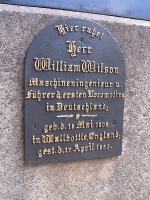 William Wilson was the first train driver in Germany. According to the German Wikipedia, he was born in Aberdeen. He came to Germany to drive the first train from Nuremberg to Fürth in December 1835. On the first trip he wore a top hat and tails. He was an employee of Stephenson and intended to stay for only a few months, but for some reason or other he stayed. He died in 1862 and is buried in Nuremberg.

So presumably this is him in marzipan:

You may wonder what the words Gott sei Dank are doing here. They are the cry of someone whose computer has no audio ability when clicking on the link to what I fear is the official Fürth jubilee song, Hier bin ich zuhaus.