Examples in this article:

Robert McFarland’s horse was given a parking ticket under the heading, “Vehicle Description: Brown Horse”.
A motorist who received a ticket in an NCP car park, despite returning to her car an hour early, was told the attendant had fined her because he had “reasonable cause to think she would stay longer than the four hours for which she had paid”.

Here’s a picture of a British parking ticket (not my car): 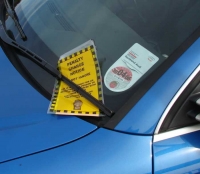