But what is this? A gavel? What looks like The Oxford Companion to the Supreme Court of the USA under a pair of reading glasses? A course in American law? 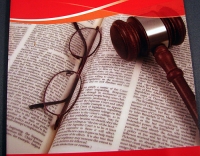 No, apparently not. It looks as if the talks are practical talks on the reform of German inheritance tax, on living wills, and even on the law of old people’s homes (Neuregelung des Heimrechts), all presented by a Nuremberg lawyer. I wonder where they found the picture?