I’m not sure how many Germans think of November 9 as Tag der Erfinder – Inventors’ Day. After all, we are mainly commemorating the fall of the Berlin Wall in 1989 or else Kristallnacht in 1938. But I learn from Stephen Albainy-Jenei at Patent Baristas (via Blawg Review) that this was Hedy Lamarr’s birthday, and she is certainly worth an entry.
I learn from the internet that Inventors’ Day was thought up by Ronald Reagan, that the date in German-speaking countries is November 9 (Hedy Lamarr’s birthday), and that the German end is supported by one Gerhard Muthenthaler (Tag der Erfinder website, German). 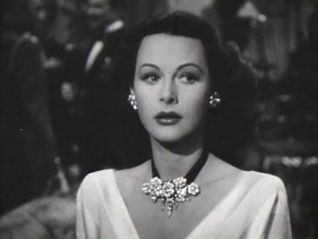 In any case, I am surprised I have never mentioned Hedy (Hedwig) Lamarr, but here is Stephen’s account:

This week we honor Inventors’ Day (German: Tag der Erfinder), which is celebrated in the German-speaking countries Germany, Austria and Switzerland on November 9, the birthday of inventor and Hollywood actress Hedy Lamarr. Lamarr, born Hedwig Eva Maria Kiesler, was an Austrian-born American actress.

Though known primarily for her film career as a major contract star of MGM’s “Golden Age”, she also co-invented an early technique for frequency-hopped spread spectrum communications in 1942, a key to many forms of wireless communication.

She also escaped from Austria and her controlling husband in 1937 in dramatic circumstances and was married several times more after that.

Thanks to Ed., of course.