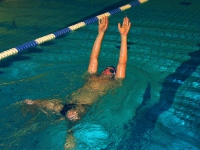 At last I have discovered what these people who annoy me at the swimming baths are doing. It’s an old-fashioned German swimming stroke. The person swims backwards, moving both arms up, back and forward again simultaneously, in a crablike manner, and taking up an inordinate space in the pool – almost as bad as two women chatting to each other.

The clue was given by a commenter to an entry (in German) by Kaltmamsell. Kaltmamsell swims a lot and I have often envied her fitness and indeed youth, not that I could swim that far when I was younger. She wrote this entry on the problem of large numbers of people in the Olympiabad in Munich. In the smaller pools I go to, it is not so much the young swimmers but the old who cause problems. I also notice at water gymnastics that nearly all old Germans, including the men, make a big point of keeping their hair dry. I can’t help thinking that swimming with your neck bent could lead to vertebra problems, but maybe the sport makes up for that.

I found the above illustration in German Wikipedia:

It says one advantage of this stroke is that you can see where you’re going – if you bend your neck far enough.

I have also seen a kind of backwards swimming without arm movements, which I believe is supposed to be good for your back, though I don’t know why.

I can’t work out which the German backstroke is – it might be the ‘backstroke of Löwenstrom’.

Another peculiarity is that most people swim breaststroke with their heads out of the water. It seems that this is what is taught at school. I started with crawl. Here is some discussion between English-speaking parents in Germany on the topic at Toytown Germany.

So here’s me picturing my kids back in Oz in a few years time —- bobbing up and down in the sea doing breaststroke with their heads above water, getting absolutely nowhere as their cousins have tears streaming down their faces from laughing so hard! (“Don’t worry about us in out in the surf Mum – we learnt this breast-stroke thing in Germany! See we’re not even getting our faces wet!” … and out to sea they drift!)

14 thoughts on “Swimming in Germany/Altdeutsch-Rücken”