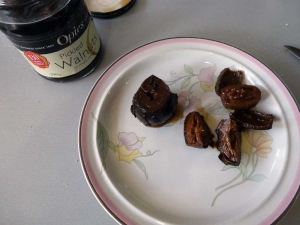 I had forgotten about these. I must have tried them and hated them when I was about ten. Some repeated BBC food programmes mentioned them and said they’re a British speciality. I think it’s only Opies who still make them. What is pickled is the immature walnut with all the surrounding flesh, outside the shell. I now find them very good with a pork pie. You have to like malt vinegar, though.

An internet search reveals many recipes to make your own, which should be OK if you have walnut trees. The commenters here are seeking a recipe for squirrel casserole with walnuts.

One possibility of ordering food from the UK is britishcornershop.co.uk. I seem to remember that during the ordering process, they tell you ‘you can still order 30 kilos more without increasing the postage’, so it’s OK for a group buy. They do have Matthew Walker individual (100 gram) Christmas puddings – similar to ones I bought at Waitrose as little presents. Mine have instructions ‘steam 30 minutes’ plus microwave time. They have Duchy ones too, but we don’t want to support people who charge twice as much and spend their time exercising unfair influence in politics.

Meanwhile, Fuchsia Dunlop can’t get used to the Japanese word tofu, as opposed to dou fu. I think beancurd is outdated, though. I didn’t realize tofu was Japanese, I thought it was Wade-Giles or something. But I think she is right.

I am being targeted by comment spammers at the moment so comments may cease to be possible for a while.

LATER NOTE: I completely forgot I once tasted Romanian green walnuts in honey. I found similar recipes for Greece and Armenia, and an Italian liqueur.