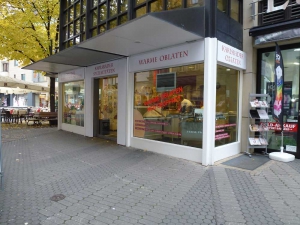 I was surprised to see this shop selling Karlsbader Oblaten, cold and warm, in Nuremberg today, though they say they’ve been there for four months.

Here is a machine for making them: 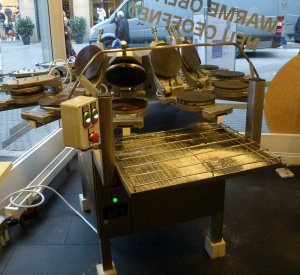 They have a huge range of flavours. 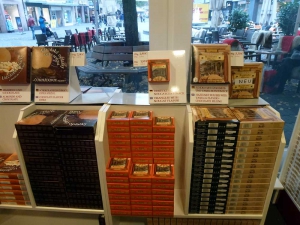 The firm is in Karlsbad – www.kvoplatky.cz

I have often encountered Karlsbader Oblaten – probably on my first trip to Prague in 1966 or my second in spring 1968, and certainly sold from a van in Karlsbad in 1990 or 1991. I have even been to Dillingen, where a former seminary is used for further training for Bavarian schoolteachers, and where the local industries include votive candles and German Karlsbader Oblaten, and visited Wetzel.

There has been a dispute between the Czech Republic and Germany on the use of the name, and I gather that the term Karlsbader Oblaten will be restricted in Germany, but firms like Wetzel which have registered it as a trademark can go on using it.

The statements of objection were declared admissible on the ground, inter alia, that registration of the proposed name would jeopardise the existence of a partly identical name, namely “Karlsbader Oblaten”, in so far that this name is used for a product and not protected under trade mark legislation. The evidence further shows that the name “Karlsbader Oblaten” originated from producers in the town formerly known as Karlsbad and that production of the wafer so named has continued for a considerable period of time. Moreover, the evidence shows that the uses of the name “Karlsbader Oblaten” referred to an authentic and traditional product having a common origin with “Karlovarské oplatky”, but was generally not meant to exploit the reputation of the latter name. For these reasons, and in the interests of fairness and traditional usage, the maximum transitional period foreseen by Article 13(3) of Regulation (EC) No 510/2006 should be foreseen.

I have only tried a small wafer with Nugat (gianduja) cream and it was better than Wetzel’s, I thought.