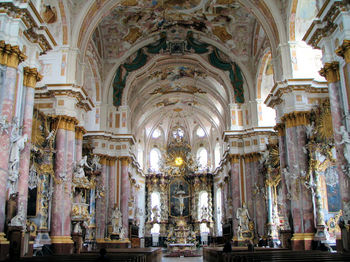 I have just been translating this . I decided to call the Raumtor separating nave and choir something like a proscenium arch. When I was reminding myself how to describe bells, I found a nice site with information on spotting bells in Gloucestershire, especially by car:

Charlton Kings, S Mary, 8 bells, Tenor 17-0-13, Grid Ref:SO964204
Parking is available in the lanes which surround the church, and the tower entrance is in the south east corner of the tower, on the outside of the church. The bells go quite well, but are not particularly clear to listen to, and the ringing chamber ceiling is fairly low. They were rehung by the Whitechapel foundry in 1958 in a new frame with new fittings. The fourth bell here was for a long time thought to be by John Palmer of Gloucester. It has been discovered that the founder “IP” that Sharpe and H.B.Walters before him assumed to be John Palmer, was in fact a founder called John Pennington. John Pennington I was casting bells at Monmouth between 1626 and 1665, and his son John II was casting until 1682.

Gives a whole meaning to the term ‘well hung’.