I seem to have missed the Kantinenblogger, who posts photos of his canteen meals every day, mainly from Fürth, but also from Nuremberg, Munich and Auburn Hills (I assume the large proportion of sweetcorn kernels is a matter of choice).

Another site that has started is about the natural surroundings: www.natuerlich-fuerth.de

In the Stadtzeitung, the Oberbürgermeister reports on how many birds have been seen along the railway line: the black stork (Schwarzstorch), nightingale (Nachtigall), green-footed moorhens (Grünfüßige Teichhühner), the golden oriole (Pirol) and the curlew (Großer Brachvogel).

I wasn’t hopeful of seeing nightingales, a search for the black stork has failed so far – have seen a kingfisher though – I doubt the curlew will be strolling around close, but I was interested by the green-footed moorhen – until I realized that all moorhens are green-footed.

Here is a juvenile moorhen hiding its feet:

and here a muskrat (they must have heard there is no price on their heads at the moment): 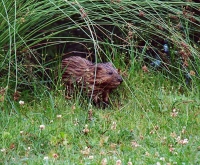