People who want a link must know a lot:

Have you ever considered about including a little bit more than just your articles? I mean, what you say is valuable and everything. Nevertheless imagine if you added some great photos or videos to give your posts more, “pop”! Your content is excellent but with pics and video clips, this site could undeniably be one of the best in its field. Excellent blog!

Now if I were spending New Year’s Eve in Fürth, which I haven’t for the last twelve years or more, I could see if they still shoot rockets horizontally from first-floor balconies and I could possibly upload a video, but failing that, I will have to think about adding great photos (as opposed to just photos).

Every weekend i used to visit this website, because i wish for enjoyment, since this this web site conations truly fastidious funny stuff too.

Thanks for writing these details on the internet.

A family member referred me to your website. Thank you for the details.

If you are going for best contents like myself, just pay a visit this web page everyday because it provides quality contents, thanks

Maybe you love beautiful jewelry as I do. I was looking for some very original necklace and a ring with garnets for my collection.
I had luck to finf the on-line which which is selling very beautiful garnet jewerly. I got the both pieces there.

This is the only time I’ve been to your site. Thnx for posting more details.

This is the second time I’ve been to your website. Thank you for sharing more details.

A family member referred me to your resource. Thnx for the information.

Undeniably imagine that which you stated. Your favourite justification seemed to be at the web the easiest factor to be mindful of. I say to you, I certainly get irked while people think about concerns that they just don’t realize about. You managed to hit the nail upon the top as smartly as outlined out the entire thing with no need side effect , other folks could take a signal. Will likely be back to get more. Thank you

all the time i used to read smaller posts that also clear their motive, and that is also happening with this post which I am reading at this place.

This is the third time I’ve been to your website. Thanks for providing more information.

I’ve mentioned weblogs on legal English before, I think, and I’ve certainly mentioned Jeremy Day’s blog on English for Specific Purposes, Specific English. But I haven’t yet put them on my blogroll, although I think they must be highly relevant here.

Here is a link to the legal English entries on Jeremy’s blog. The latest one, My first and worst legal English lesson, is a great description of what can go wrong when you present yourself as more expert than you are – certainly a risk not only for non-lawyers teaching legal English, but for lawyers too. If you’re helping lawyers to improve their English, you don’t have to be the source of legal knowledge, but the facilitator.

The entry earlier than that, Legal English blogs, is a whole year old and gives links to other blogs on legal English (including Transblawg!).

And here’s another one: English for Law, by CKL, with many suggestions for teaching materials sources.

There’s probably no point in saying that blogging may be slow in the next few weeks, since it has also been slow in the last few weeks.

I have added a photo to the entry where you can buy the Pope for your train set, and another to the entry with the ad for a Fürth lawyer.

It seems to me that blogging is slowing down. Some German weblogs, meanwhile, seem to be mutating into food blogs when they weren’t before. This is not a food blog, so I won’t give the recipes for recent successes – sucking pig’s head before and after, and coconut pyramids: 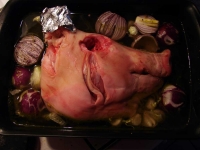 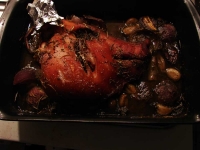 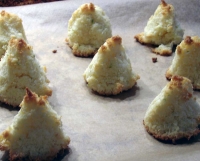 Transblawg is seven years and three days old today. Sorry about the slow posting. None of my three readers reminded me. However, a description of a different birthday celebration, at the restaurant Essigbrätlein in Nuremberg, will follow (with pictures).

Legal English Teacher by Andrew Nathan in Warsaw, and

For more details of German law blogs, Henning Krieg’s kriegsrecht.de regularly reports with comparisons. I do better in Google than elsewhere.

There are a large number of links on matters German, some of them German and law, for example the German American Law Journal (note in its English version an entry on an article by Dr. Jessica Ohle on Recent Trends in German Employee Compensation. And let’s not forget the similarly-named German Law Journal, another excellent resource.

Scroll down (passing the non-German law links) for a large number of further transatlantic links.

Famous German-Americans are mentioned, although not including the three famous bankers from Franconia: Lehmann, Goldmann and Sachs.

German law blogs can take part on October 6, which is apparently German-American Day. This is a day when Americans put on their Lederhosen and pretend they are in Munich, I believe.

Any German blawgs that would like to be showcased and linked next Monday presumably have to have an entry written in English (?). They can submit this by Saturday October 4 but ideally even earlier.

Blawg Review explains itself on its site. I am probably not the person to explain it. It is a kind of blog carnival.

Here is the gen on Blawg Review for German American Day.

And here is the LawPundit blog where Blawg Review will appear, perhaps in a later time zone than CET.

The host of Blawg Review in this case is Andis Kaulins, an American lawyer who has taught American law, legal writing and legal research at Trier University and also translates. I imagine one has to hope that Andis will showcase one’s submission.

You will note that LawPundit blog offers Google automatic translation into German, thus:

I think I might take Gabriele Pauli over Sarah Palin.

The funny thing is, lots of German blogs appear in English, or a form thereof, but those are directed at readers outside Germany, whereas German law blogs tend to be in German – it makes sense to me!

But Blawg Review would be glad to have more German law blogs linked.

(Entry corrected after publication on account of a number of errors)

Some topics I mentioned earlier have been taken up elsewhere recently.

I was a bit early on this. The way for capital ß has now been opened (Tagesspiegel)

As Cherry point out, it’s not so easy on the keyboard.