I haven’t had much time lately so to keep something on offer I’d like to refer to some of the best links on my site. I am afraid some of the items on the blogroll are dead, but some aren’t.

The Centre for German Legal Information calls itself ‘the gateway to German law in English’. I normally use it to find translations of German legislation into English. They aren’t always reliable. On top of this, I believe it is the policy to drop translations of legislation which is no longer current. But we translators often have to translate old statutes! Of course you can’t rely on those translations, but they are worth a look. Some translators refer to the official German site with ‘official’ translations of statutes. But those are all at cgerli anyway. And what is very good, you can click through to search the German names. Sites that expect you to guess the translated name are harder to navigate. Cgerli also has judgments and other materials.

The German Law Journal is also always worth a look. It is published regularly with articles on a variety of areas of German law.

Some of my favourite law blogs from the UK are IPKat, which currently has a very timely report on the third Bundesgerichtshof decision on chocolate rabbits: Bunny dispute: Lindt vs Riegelein – BGH decides again…; ObiterJ, which is always splendid at explaining its topics, as is the UK Criminal Law Blog – the latter has an interesting piece on Who, or what, is a lawyer?

‘Lawyer’ as such is not a protected term. That means that anyone can call themselves that without fear of legal repercussions (it is a criminal offence to pretend to be a Solicitor or Barrister or someone otherwise qualified to conduct reserved activities) – although if you start charging money for it you may find yourself hit with a fraud charge. ‘Lawyer’ as a legal term is not defined anywhere in the Legal Services Act 2007 and therefore there are no restrictions on who can, and can’t, call themselves one.

There are other legal translation blogs around, in particular Juliette Scott’s frequently updated From Words to Deeds: translation & the law, which is a good source not only for conferences and other academic links. 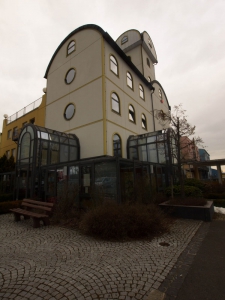 Unfortunately I arrived at this church at just before 2 p.m. on a Sunday, and it was filling up with people coming for the weekly service. I didn’t like to photograph the interior. I suppose if there were no services we would not have these churches. This one, which reminds me a bit of 1980s flats, is called Licht auf unserem Weg (pictures of interior at link). It’s at the lorry drivers’ service station at Geiselwind. 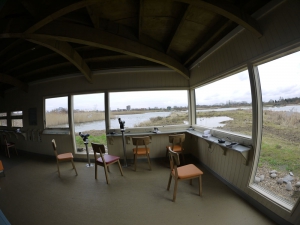 This is the renovated Headley Discovery hide at the London Wetland Centre. Big windows with seats, telescopes and binoculars and CCTV coverage of birds, and books. It’s one of several hides on the site. I don’t think I used the telescopes enough, as I was trying out a new lens on the camera.

The London Wetland Centre was set up from 1995 on a site vacated by Thames Water. It was based on Peter Scott’s idea that rather than building a centre near an existing wetland, one could set up a wetland in a city and the wildlife would come. Hence the large numbers of migrating birds.

It’s very close to central London. You can get a bus from Hammersmith tube station that terminates at the Centre. There are well signposted walks. I went on the South Route and saw quite a few water birds I don’t see in Fürth – wigeon (Pfeifente), shelduck (Brandgans), great crested grebe (Haubentaucher), possibly gadwall (Schnatterenter) and shoveler (Löffelente), and Barnacle geese (Nonnengans). What I didn’t realize was that there are a large number of non-indigenous birds bred and kept at the Centre, on the West Route. 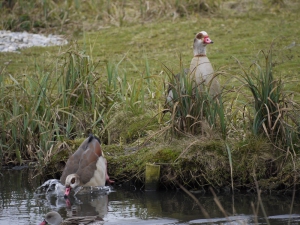 Definitely worth a visit, above all for the opportunity of viewing birds with ideal equipment. The shop has a huge variety of bird feeders and foods, and there is also a specialist shop for telescopes and binoculars.

I gather (from a translators’ mailing list) that the City University Legal Translation MA is to close. (Addition: the current full-time students and the second-year part-time students submitting their dissertations in October 2013 are to be the last intake). What a shame! I have seen some documents about its organization and it must have taken a great deal of planning. I was glad that I did not have to create a new legal translation course when I was in Erlangen – especially one with an interface between translation theory and legal translation! It seems a real waste of organization and knowledge. You can read a lot about the course at the above link, albeit now probably irrelevant.

City’s Legal Translation MA will allow you to acquire a specialisation in an area of translation for which there is an increasing demand.

The course provides an overview of the legal systems and terminology in England and Wales as well as those of the country of your other language.

It establishes a theoretical framework for legal translation and provides practice in translating key documents in a wide range of legal fields.

The curriculum was developed in consultation with the legal translation industry and is tailored to its needs.

A similar situation has arisen with the Imperial College Translation Studies Unit, which Imperial College feels does not fit into its programme – presumably with the argument that translation is an art. The course ought to be relocated, they say – but this seems tantamount to closing it.
Here’s a link to a petition against this http://www.change.org/en-GB/petitions/petition-against-the-transferral-or-closure-of-the-translation-studies-unit:

The Imperial College Management Board has informed us that the activities carried out by the Translation Studies Unit (TSU) are not considered core to the College strategy and that, if possible, the Unit should be transferred to another institution. If this solution proves not to be feasible, consideration will be given to closing the unit by the end of September 2013.

Here’s something about the TSU. 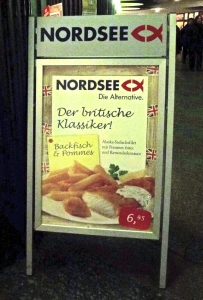 This is the solution if you are British and missing Alaskan pollock with rémoulade and German chips. No sign of malt vinegar or wally.

Alternatively, you could try to change your tastes.

Here’s a clause from a German model employment contract I took from the IHK Frankfurt am Main:

The employee shall during the employment relationship and also after it ends preserve confidentiality with regard to all trade and business secrets.

I hate discussing the ins and outs of contracts. Many other legal translators will disagree with this. Points of contention are: §, shall, employment relationship, trade and business secrets, and generally how ‘native English’ the whole thing sounds (not very, in this case).

But this is just about shall.

How can you translate sich verpflichten?

What I usually do is use shall. I only use it where it indicates something is mandatory. In an ideal world, the subject of the sentence should be clear, as here (the employee shall). It is not such good drafting to use the passive (confidentiality shall be preserved) but we are translators, not drafters, and if the German doesn’t make it clear whose duty is referred to, there’s nothing we can do about it.

There are proponents of plain English who insist on avoiding shall and using must to impose an obligation. They normally address people drafting from scratch in English, rather than translators. Plain English can become a bit of a crusade and it’s often said by lawyers that not everything in the law is susceptible to simplification (they would say that, wouldn’t they, but I tend to agree).

I prefer the middle road which says shall should only be used in a mandatory sense. To quote Doonan and Foster, Drafting, chapter 7:

‘Shall’ should be used only in the imperative sense in a legal document to impose a duty or obligation on the legal subject to whom it refers.

The most detailed criticism of shall I have read is by Bryan Garner in A Dictionary of Modern Legal Usage (I think the second edition has a different title). As I recall, he nailed 16 different uses of shall. In his edition of Black’s Law Dictionary, the 9th edition of which I happen to have on my iPad (and iPod), he gives five senses. The first is:

Has a duty to; more broadly, is required to

If you read anything about the court cases where the use of shall has led to problems, you will soon understand the advantages of must. But those cases apply to people writing English. All the contracts I translate are governed by German law and have a clause saying that the German version takes precedence over the English; my translation is for information only. If I were asked to help cobble together a contract to be governed by English law and where the English language took precedence, I would refuse as I would regard this as unlicensed practice of law. So no court is likely to stumble over shall in my translations.

So, why not will, must or is to? I have used must and I like it. Will is fine too, but if mixed with shall it confuses readers who are not native speakers of English or not English-speaking lawyers. I find is to a bit clumsy. I have heard some odd objections to must, for instance some seem to regard it as weaker than shall. It probably comes down to traditional use, and shall is certainly not avoided by most of the translations into English by German native speakers I’ve seen. People are familiar with it, expect to see it, and probably understand it as mandatory.

There is a lot more that could be said on this topic, but that’s enough for now.

We’ve had a discussion on this before: Translating Kafka / Kafka auf Englisch (see the comments too).

Now, in a post on the more serious subject of Shhh… – The Justice and Security Bill, introducing secret hearings in the UK, Adam Wagner links to a video on the same topic.