The heading of this blog should now say ‘no longer in Fürth’, unfortunately. But I will get round to that one day, I hope. 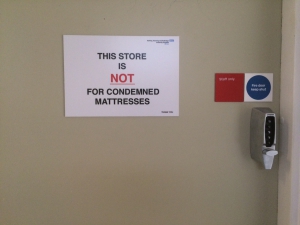 1. In the UK you can order postage stamps online from various places, but only Royal Mail can send you 88p stamps – the standard for the EU. Another service refers to these stamps as ‘weird and wonderful’ denominations.

In Upminster, you can definitely buy one 78p plus two 5p. This is in the main (sub-) post office.

2. It costs only about 25 euros to have post sent on by Deutsche Post for a year, but Deutsche Post does not recognize postcodes that are longer than 5 digits. Thus the first half of the UK postcode is isolated and identified by them as ‘Länderkürzel’. The county appears straight after my name, the house number after the street. This would all be OK if only the postcode were there. However, after a phone call they have ‘fudged it’ by putting the postcode after the town name – which of course is where it should be anyway.

No wonder the service is so cheap – it is self-annihilating.

Can you commit a breach of copyright by watching streaming pornography? The Cologne Landgericht (officially translated into English as the Cologne Regional Court) has apparently admitted that it may have been unjustified in requiring the names of customers to be revealed, following which letters before action were sent out, requiring recipients to pay 250 euros (text corrected – see first comment).

In the Guardian and elsewhere, the Landgericht has become the Cologne state court.

Did they get the story from an American press report? The Independent uses it too. But even there, state court is a misleading term. We’re not talking about a dual system of federal and local law here.

Some US sites intelligently write of a Cologne court. That seems enough information in this context.

I’m not sure whether the German site The Local purports to write US or British English:

Cologne lawyer Johannes von Rüden represents hundreds of what he says is at least 10,000 people who were sent the legal letters and ‘fines’ from Bavarian law firm Urmann and Colleagues (U+C). …It is thought the Cologne state court only ordered internet providers like Deutsche Telekom to hand over names and addresses of customers because it misunderstood what Redtube.com was.

Yes, Abmahnung is difficult to translate.

But it does condescend to refer to coaches later in the article.

Goeuro.de, which released the online search figures, says it expects around a million passengers to travel by coach around the festive period.

Keith Houston, of the Shady Characters book, turns his attention to the section symbol.

I’ve always known it as the section sign, or section symbol; Robert Bringhurst (The Elements of Typographic Style)[1] and Theodore Rosendorf (The Typographic Desk Reference),[2] my go-to typographic references, agree. It seems odd, though, that this eminently shady character has no other name. Have you come across any other names for the pilcrow’s partner in crime?

It’s called the paragraph sign in German, and it symbolizes law. It’s used in US statutes too, but there called the section symbol.

It’s a symbol I used heavily (as a mathematical symbol) in my PhD thesis, and many other people who use it in the same way I did referred to it as “paragraph” which always drove me nuts because to me, the “paragraph symbol” is the pilcrow. But sadly that name is out there. I always called it the “section symbol”.

Typography for Lawyers reminds us to use a non-breaking space after these symbols.

If Eats, Shoots & Leaves whetted your appetite on the subject of punctuation, then you have a treat in store. Shady Characters is an authoritative, witty, and fascinating tour of the history and rationale behind such lesser known marks as the ampersand, manicule, the pilcrow, and the interrobang. Keith Houston also explains the octothorpe — otherwise known as the hashtag — and my final comment on his book is #awesome.
Ben Yagoda, author of How to Not Write Bad