I heard on the radio recently that Schiller’s putative skull is being DNA’ed and compared to the DNA of Schiller’s descendants. Actually I wonder if there have been any new developments, as this was news last summer, and incidentally Schiller’s only available relations had to be exhumed too.

When Goethe wrote his famous lines, he was not in the charnel house at all, but had the first ‘Schiller skull’ at home, under a glass dome and on a blue velvet cushion. ‘I spotted it at once’ is poetic licence too:

The skull reminded him of the Aegean and the ancient Greeks, or so say my notes pencilled presumably in a lecture by Ilse Appelbaum-Graham in the late 1960s.

This skull was simply picked out of the mass by the mayor of Weimar in 1826 because it was the biggest and he thought Schiller must have had a bigger brain than the others.

Another skull was produced in 1911/1912 – the New York Times report of the time can even be found online.

The investigations have been presided over by the retired anthropologist Herbert Ullrich, author of Schädel-Schicksale historischer Persönlichkeiten, an anthropologist from Freiburg University with the Monty-Pythonesque name Ursula Wittwer-Backofen, and scientists from Innsbruck University who have not only been having trouble with Mozart, but have also examined Ötzi and thousands of 2004 tsunami victims in Sri Lanka. If I read the press right, any conclusions reached will not be released until May, when a film on the subject is to be shown on TV, presumably on May 12, the 208th anniversary of Schiller’s birth. To quote Time, in July 2007:

Besides trying to prove which skull is genuine, the Friedrich Schiller Code team will run a series of tests to corroborate the genetic analysis, search for traces of opiates or harmful heavy metals, and perhaps confirm contemporary reports that Schiller died of tuberculosis — thereby disappointing conspiracy theorists who claim he may have been poisoned by Freemasons. The poet himself probably wouldn’t have cared what fate befell his remains. “The Weavers of the Web — the Fates — but sway/ The matter and the things of clay,” he wrote in his philosophical lyric The Ideal and Life. “Safe from each change that Time to Matter gives/ … The form, the archetype, serenely lives.” And so it will, whichever skull takes the crown.

Here is the latest news from Reuters – more descendants have been exhumed, so presumably they drew a blank on the first ones:

“The remains of the bodies were in good enough condition for a DNA examination,” said Egon Moehler, a spokesman for the German city of Stuttgart, where the bodies of three relatives who died in the 19th century were unearthed.

To obtain DNA samples for testing, the city has opened the final resting place of the dramatist’s eldest son, Carl, his grandson Friedrich as well as the wife of his grandson.

My money is on neither skull being Schiller. Would William Hill offer odds on this one?

LATER NOTE: I thought I would add the German of Schiller’s poem, but it was difficult to locate because the translation was so free. Here’s the original, from Projekt Gutenberg-DE:

And here’s the translation quoted by Time, from a site on German Classics:

The Weavers of the Web–the Fates–but sway
The matter and the things of clay;
Safe from each change that Time to Matter gives,
Nature’s blest playmate, free at will to stray
With Gods a god, amidst the fields of Day,
The FORM, the ARCHETYPE, serenely lives.
Would’st thou soar heavenward on its joyous wing?
Cast from thee, Earth, the bitter and the real,
High from this cramp’d and dungeon being, spring
Into the Realm of the Ideal!

Apparently translated into English by Calvin Thomas, LL.D. no less.

Siemens has a huge ‘practice’ airport in Fürth (this quote dates from a couple of years ago).

With the new Siemens Airport Center (SAC) in Fürth (Germany), Siemens has created the world’s only innovation, planning and testing center designed to develop specific airport and airline solutions together with customers, and to test them under simulated operating conditions. An entire airport infrastructure was recreated in compact form over an area of approximately 9,000 square meters (29,527 square feet).

One can’t help wondering if Terminal 5 at Heathrow did without something like this. 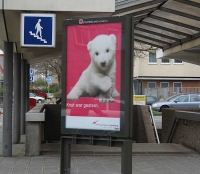 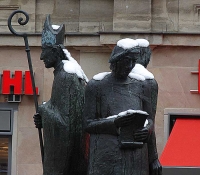 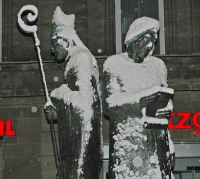 Above the Law posts Allen & Overy’s fee schedule for various levels of lawyer in Prague, London and Paris. As commented by others, the fees for trainees and junior associates are particularly striking – a commenter says ‘They don’t know anything’.

In Prague, the translator earns even less.

PUNDO3000 contrasts photos of German food with the picture on the packet.

In the recent entry on the Mills-McCartney divorce arrangements, I quoted this:

This is not a case where the principle of sharing of the “marital acquest” is engaged at all.

This term was new to me. It seems a good solution for Zugewinn in German law: the property acquired by both spouses from the date of marriage on, which may be divided fifty-fifty in Germany if so agreed or in default of a contract. The situation in England is different, but still it can be necessary to talk about this amount as one of the factors.

I find acquest in the OED:

3. Law. Property gained by purchase, or gift, or otherwise than by inheritance.

Used in this sense in French and in jurisprudence, it says in the etymology.

Google reveals 112 uses, and I think it must recently have been taken up. Probably it was one of the recent big cases where the concept needed to be discussed that used it and was widely reported.
Here‘s an example:

Increasingly on divorce (and the same principles are likely to apply on the dissolution of civil partnerships) the court is interested in ascertaining what has been described as the ‘marital acquest’, that is, the assets accumulated by the parties during their marriage.

I see it was quoted in Miller v. Miller.

This does not mean that, when exercising his discretion, a judge in this country must treat all property in the same way. The statute requires the court to have regard to all the circumstances of the case. One of the circumstances is that there is a real difference, a difference of source, between (1) property acquired during the marriage otherwise than by inheritance or gift, sometimes called the marital acquest but more usually the matrimonial property, and (2) other property.

Zugewinn is usually translated as accrued gains or surplus.

It sounds very much as if Steven Levy’s wife threw his MacBook Air (he’d been lent it for review) into the trash compacter – see Gone, Without a Trace, in Newsweek.

Well, one of Beuys’ Fettecken was disposed of even when it was in full view, rather than hidden in a pile of papers like the MacBook. And another German victim was Gustav Metzger at Tate Modern:

The spokesman said: “The bag was removed the morning before we first opened. It was not put in a crusher but in a skip. It was removed but it was seen that it was damaged. That’s why the artist put another bag in its place.”

He pointed out that Metzger had not actually had to pick up new rubbish to put in his replacement bin liner but had simply found one that had already been filled and discarded. “The bags are taken from where they are found and put in the space,” said the Tate. “He doesn’t manipulate what’s in the bag.”

I think I could help.

There is a great discussion in an entry and comments in …jurabilis! on the two forms Schadenersatz and Schadensersatz. I remember puzzling about this for many years when I was teaching legal translation. We used to discuss translations into German, even if I didn’t teach them myself.

We eventually decided to use Schadensersatz all the time, but had the feeling that German lawyers preferred it without the S in the middle – there were always a public prosecutor and a judge doing some of the teaching.

The BGB has SchadenSersatz too, but was that always the case? Apparently so. The form without the S is used in Austria – surprisingly, when one considers words like Erbseinsetzung and Erbserklärung, which always remind me of Erbsensuppe.

This has even been discussed by Bastian Sick, but to little effect, as usual.