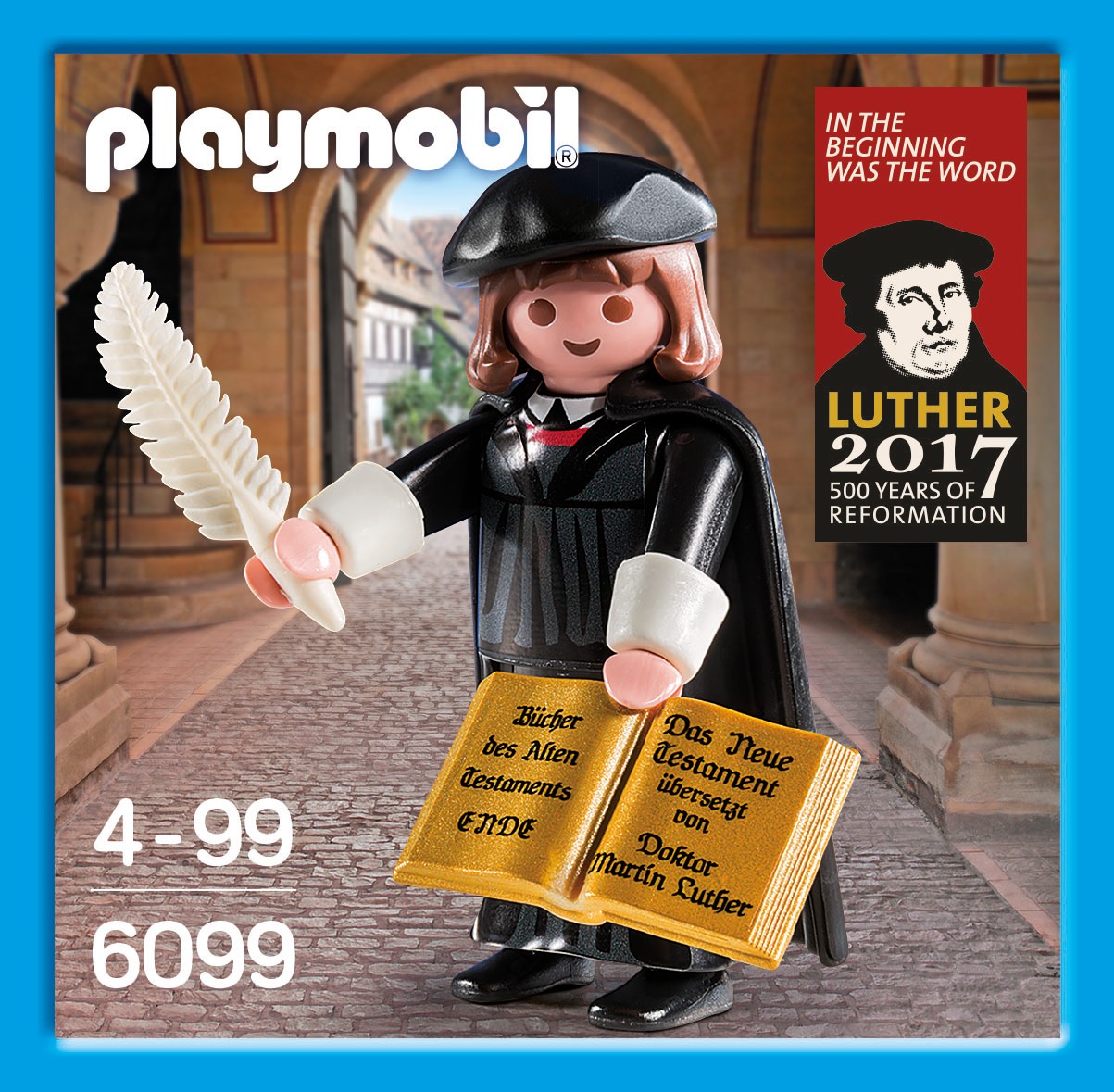 Hans Beck, who invented the Playmobil figures, used to be my landlord in Fürth, so I must report: Martin Luther toy becomes fastest selling Playmobil figurine of all time

Mastersingers at the ENO.

Can we please replace Simone Weil with Franz Kafka? This is getting silly.

I think at the end they produced placards with an even wider range. One libretto:

Beware! Evil tricks threaten us:
if the German people and kingdom should one day decay,
under a false, foreign rule
soon no prince would understand his people;
and foreign mists with foreign vanities
they would plant in our German land;
what is German and true none would know,
if it did not live in the honour of German Masters.
Therefore I say to you:
honour your German Masters,
then you will conjure up good spirits!
And if you favour their endeavours,
even if the Holy Roman Empire
should dissolve in mist,
for us there would yet remain
holy German Art!

This expression is mentioned here as an example of legalese that needs improving, but I have no evidence of any improvement.
And a colleague was taken aback by the 41 characters in Bundeswehrattraktivitätssteigerungsgesetz. But of course short titles of statutes do turn out that way – see the graphic under the heading of the more recent article Wie meinen?:

If the ‘short form’ is so long, no wonder they refer to statutes by the abbreviation.

At all events, since 2009 there has been a team at the German Ministry of Justice which reviews legislation before it is passed to see if it is comprehensible. It is called Redaktionsstab Rechtssprache

There’s been an international conference on writing more comprehensible legislation and abstracts of the papers are available on the BMJV website. Here’s the abstract of the UK talk – the talk itself isn’t online as far as I can see.

Diggory Bailey
Parliamentary Counsel
Cabinet Office UK Government
Talk on work of Office of the Parliamentary Counsel (UK)
Abstract
The Office of the Parliamentary Counsel Office in London is responsible for drafting Government Bills for introduction into the UK Parliament. The Counsel are lawyers who specialise in drafting. They are responsible for drafting legislation that gives legal effect to the policy as well as ensuring that it is as clear and simple as possible. The same people have the function of drafting legislation and reviewing it for
comprehensibility/clarity, in contrast with some jurisdictions. This paper describes some of the ways that we have improved the comprehensibility of legislation. It considers: the Tax Law Rewrite Project and techniques developed to make legislation clearer and easier to understand (shorter sentences, headings, overviews etc); introduction of explanatory notes; the role of the Office drafting techniques
group and drafting guidance; possible user research into different drafting techniques.

But there are some profiles of parliamentary counsel available.

In another mailing list last week, I was struck by the question of how to translate the term divorce decree into German.

One would normally write Scheidungsurteil, but recently the term Urteil has been removed from German divorce law, apparently because it makes divorce sound like a fight (haha!). Indeed, all family law cases now end in a Beschluss, which sounds more harmless, allegedly.

So the colleague’s question was: do we change the translated term to suit new German practice? The answer on all sides was ‘no’.

And yet when English law removed the term plaintiff and replaced it by claimant, translators in the UK followed suit, even though the term plaintiff is used in Ireland and thus in the EU, and also in the USA and other common-law jurisdictions. And similarly, in family law, it’s common to use contact instead of access in translations, just because the term has changed in English law.

Of course one has to consider how close the concepts are in German law and English law. And also whether the audience is from one specific jurisdiction – it’s statistically more sensible to use plaintiff unless the readership are purely from the UK.

I’m trying to think of other cases where changes in terminology might affect translations. One area is the introduction of ‘politically correct’ usage, which may occur in the USA and UK before it does in Germany. Should a German institution use non-sexist language in its English documentation even if it doesn’t in German? I think so.

The names of courts, court personnel and lawyers often change. So do forms of companies and partnerships.

People in the UK don’t usually believe that British companies take over property in Germany – the tabloids give them the idea that it only happens the other way round.

I note that although the Fürth Oberbürgermeister, Thomas Jung (the only mayor I know who you can wave to in the street and he waves back), has had trouble with Deutsche Bahn for years – they are trying to drive the Nuremberg-Fürth line in a new direction through farmland, and are not keen to pay for the upkeep of Fürth railway station – he seems less than happy for Britishers to take over a German railway.

Jung seemed only slightly mollified to hear that Tobias Richter, the head of National Express’s German subsidiary, is a Franconian, trained at Vach, worked from Fürth Hauptbahnhof for four years and knows that there is no station at Großgründlach now.

The local railway in the Nuremberg-Fürth-Erlangen conurbation is a fairly new enterprise. It has always been a real pain for students and others to commute from Nuremberg or Fürth to Erlangen – sometimes in the past standing in corridor trains. However, I hope National Express does well. I have stopped coming home late at night on their c2c Fenchurch Street trains as they are full of slightly inebriated people travelling to Essex and eating beefburgers, chips and curries. The District Line does have its virtues.

This was a recent mailing-list discussion.

We are advised nowadays to avoid Latin expressions, even in legal English. When avoiding inter alia, we are widely advised to use among others, but this doesn’t always work.

Actually, among others sometimes works in a wider sense, but not always.

Thus, here it works, as ‘others’ is taken to refer back to ‘factors’:

The survey, carried out by The Economist, rates locations based on factors such as stability, healthcare and infrastructure, among others.

Museum collections have been enriched with video records. Registered accounts are devoted to, among others, functioning of ghettos in Lublin, grounds of the Majdanek camp after its liquidation, and post-war fates of a former prisoner of KL Lublin.

These are often non-native English texts, but they may have taken their advice from native sources.

There is a problem that Bryan Garner, who edits Black’s Dictionary, does say in his book on style that
‘among others’ refers to both people and things. This is not the view of Mellinkoff or of The Cambridge Guide to English Usage or of Thornton on Legislative Drafting – all agree with me that ‘among/amongst others’ means people.

One of my colleagues quoted a slightly edited example from a search engine as a sentence where ‘among other things’ would not work, he felt:

For example, the Transparency and the Markets in Financial Instruments Directives, among others, have come into effect since 2003.

We also had an argument about this. Some don’t like the use of amongst and whilst, which are more common in BE than in AmE, but even in BE less common than the forms without -st on the end.

I don’t think it’s relevant to us BE speakers that it sounds pretentious for Americans to use those forms, although we may think about our target audience if they are Americans. My target audience is often a variety of native and non-native speakers of English in Europe, some of whom are going to be from the USA, so I tend to use double inverted commas and I suppose I should avoid ‘amongst’. I certainly avoid the verb ‘to undertake’ in a contract because I believe, rightly or wrongly, that Americans find it odd. A colleague in Vienna (no, not you, Adrian) once got very hot under the collar at the very idea I might pander to Americans, but there it is.

But as for the use of ‘whilst’ in BE – I hate it! I wonder why. I don’t hate ‘amongst’. I think I am being snobbish here. I associate it with people who aren’t very well educated. But I haven’t found that confirmed.

Some publications on both sides of the Atlantic disapprove of whilst in their style guides (along with “amidst” and “amongst”); for example:

I have mentioned before that lawyers’ Latin differs from jurisdiction to jurisdiction. You can have a nice library of glossaries of legal Latin for England and Wales, Scotland, the USA, Germany, Austria and Switzerland.

There’s been a move to reduce Latin and for legal texts to be comprehensible to the public for some years now, famously in Woolf’s Civil Procedure Rules in 1998. But not every intended simplification really works.

A 2004 article in the Law Gazette, Language Barrier, is useful. Quoting David Ibbetson, professor of civil law at Cambridge University:

‘Sometimes Latin phrases were used as a sort of shorthand for technical terms which could not be translated into simple English,’ he says.

‘Actus reus, for example, doesn’t simply mean guilty act, and to try to translate it out of the Latin into comprehensible English would risk giving the impression that it had an ordinary language certainty.

‘So we do have to be careful not to try to achieve a spurious comprehensibility at the expense of accuracy.

That said, there can be no excuse for retaining Latin terminology simply because putting it in English would demystify the whole law – like insisting on singing operas in German because the words sound so silly in translation.’

Finally, one of the expressions found useful is Latin, is mutatis mutandis. Note that this has been replaced in English legislation by ‘with the necessary modifications. Here’s a Google search:

“with the necessary modifications” site:www.legislation.gov.uk