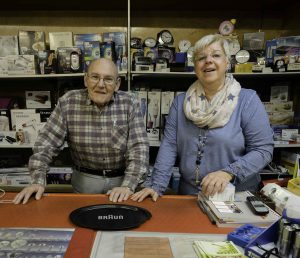 Here’s a photo of my downstairs neighbours for many years, Dieter and Jutta Mund, who ran Elektro Götz in Fürth (they don’t actually live there) but have to close on March 31st, which means this Saturday will be their last trading day. I took the photo in October 2016 and I’m sorry I will not be able to visit them in their shop again.

The kind of shop where if you want a vacuum cleaner bag replacement you will be given full details of the function and price of several manufacturers. 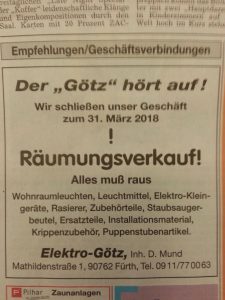 No doubt buying online has meant that a shop of that kind can’t make ends meet nowadays. I am surprised they managed so long!

Many thanks to Ralph Stenzel for keeping me informed.

The ITI is offering a workshop on contract translation: Dual German/English Contracts Workshop in Milton Keynes in May. Event Details:

This workshop – aimed at both established and aspiring legal translators working from German into English and English into German – will boost your knowledge about German and English contracts and improve your translation skills in this field.

During the session, you will:

Have put theory into practice, identified and discussed legal translation problems in specific language direction, based on a short contract

I think this year I will probably ignore this blog’s birthday (early April, 15?). When I started there were a few translation blogs, although probably no other legal translation blogs. I thought that after I stopped teaching legal translation, I still had a lot of things to say about it. But nowadays I am more likely to post interesting links to Twitter. Goodness knows how many I am missing.

A websearch brings up a lot of posts on ‘Best translation blogs’. I am fond of this description of mine:

This should teach me not to be so full of myself.

Here’s a new legal translation blog: Language with a Pinch of Law.

Like many, it’s the offshoot of a legal translation firm. It’s run by Paula Arturo and its languages are US English and Spanish (Argentina) and Portuguese (Brazil). There is an active Twitter feed too. It goes into US legal usage quite a lot (often quoting  Ken Adams or Bryan Garner (Black’s Law Dictionary)). There is also apparently a Facebook group called Legal Writing and Translation, (‘For those who passionately pursue linguistic excellence’), but I haven’t investigated it. The main emphasis of the blog is probably translating US contracts (common law) into Spanish (civil law).

Nikki Graham in her Tranix blog (My words for a change) started a translation and interpreting BLOG survey in January of this year, and she has now published a first post on the results: Blogging is not dead.

She had 190 responses. One finding was that over 84% of those replying do read blogs (but then why would they fill in a survey about blogging if they didn’t?). The next question: is blogging good for your business? The majority did not think so.

I had a problem with that question because I did not create this blog directly to be good for my business, although it might appeal to other translators, and if legal translation is not their special field they might recommend me to their clients. But then again I seem to have enough work.

There are a lot of quotes from survey answers. There is to be a second part:

In part 2 of the survey results, we’ll look at the reasons why people do and don’t blog.

I will be interested in that. When I started this blog, the world of advertising yourself as a translator was very different.

From another blog: Martin Crellin, in false friends, good and bad translation, posts on becoming a German. He writes in German, despite the English title. I was amused to read that one of the places he had to apply to asked for a handwritten c.v. – although he found out later he could have done it on the computer. I remember handwritten cvs!

Here are the two texts I am about to discuss:

English translation of the judgment

I apologize in advance if I seem to be nitpicking in the following, since the translation is excellent and reads very well in English, although the latter is not a 100% requirement in legal translation. I assume the translation was commissioned by the Cologne law firm Wilde Beuger Solmecke, who represented both Project Gutenberg and its managing director and CEO Dr. Gregory Newby.

A commenter on my earlier post is interested in a discussion of the US English aspects of this translation. I had not thought about that. It is very similar to a British English text. However, I suppose that people might be interested on what strikes me, so I will report on that at the end.

The following are just a few remarks out of many that could be made!

Use of reported speech

Anyone translating a German judgment into English must make it clear when a statement is direct speech (the words of the court) and when it is indirect speech (the submissions of the parties). This translation does that very well.

An example: in the section of the judgment setting out the facts of the case, the words of the parties often have to be summarized, and it must be made clear in German and English that these are what the parties state.

Tr: The defendants claim that the first defendant has no knowledge of the nationality of its users.

Tr. The defendants claim they are not liable for damages as their actions were neither willful  nor grossly negligent.

Here it was necessary to make it clear that this was a party’s statement, and also which party stated it.

This may seem elementary, but it is something that inexperienced translators often overlook. It also surprises me that native speakers of German who translate into English (quite common not only in Germany but in the USA, where Germans may have lived so long that they feel more comfortable with English than with German) do not always realize that this is reported speech: they learnt it from hearing it, rather than from being taught the grammar.

There are various ways of indicating reported speech. One possiblity is to write ‘The defendants submitted as follows” and then make it clear typographically that several paragraphs are the defendants’ statements. I don’t myself use ‘allege’ or ‘allegedly’, unlike the translator here, because I find it suggests that there was something suspicious about the statement – here is an example:

Die Handlungen der Freiwilligen könnten den Beklagten nicht zugerechnet werden.
The actions of the volunteers can allegedly not be attributed to the defendants.

I would rather know who ‘alleges’ this, although it is probably clear from the rest of the paragraph.

I prefer Frankfurt am Main Regional Court (recommended by German authorities).
District Court: this is unclear – does it mean Landgericht or Amtsgericht? On page 10 (and elsewhere) reference to a decision by ‚Regional Court of Hamburg‘.

Through?
I would say the court is ‚sitting with (judges)‘ or ‚composed of‘…

The defendants shall bear half of the costs of the proceedings each.

What I would do differently

Bezug wird genommen
reference shall be made

Me: Reference is made

Me: The court finds that the defendants are liable as joint and several debtors to pay damages to the plaintiff

Me: under section 32 of the Code of Civil Procedure (Zivilprozessordnung)

I would not translate Rechtsanwälte as attorneys-at-law, but just as attorneys. The former sounds too much like part of the common-law system.
I would not use authorized proxy for Prozessbevollmächtigte – I would reserve proxy for someone representing another at an AGM. Maybe attorney of record or counsel.

What makes this translation US English?
There aren’t many differences from British English here.
The usual: obligate (rather than oblige, which is less common in BrE than be under a duty)
not proven

Here’s a better summary than mine: Court Order to block access in Germany.

This case has been going on for a while and there will presumably be an appeal.

Incidentally, there is a German Projekt Gutenberg, run by Spiegel Online, which is not involved here and which I am sure complies with German copyright law.

At all events, the articles quoted give links to the original judgment and the English translation. I don’t think we often see such a good chance to comment on translating judgments (I’ve done much more translating of decisions than of contracts over the years) so in a separate post I will comment on the translation.

1.A thread on Twitter had English speakers recount their mistakes speaking German. Two of them had understood Kännchen Kaffee as Kaninchen Kaffee. Another remembered being in a restaurant and saying Die Reinigung bitte. There was also a request for Ein Glas Leistungswasser – no one mentioned that you would be looked at oddly in Germany even if you asked for Leitungswasser. There was a request for a Crevettenhalter. And someone used to nod to indicate she understood the other speaker even if she could not speak so well; later she replaced the nod by saying Ich verstecke.

2. The German American Law Journal (American edition) reports that a German court recently held that it is OK for tax purposes in Germany for invoices to be in electronic form. I still have two clients who want paper invoices rather than PDFs. Let’s see if this changes now. Invoicing Germany – AirMail or EMail

A customer had claimed a right of retention based on the alleged insufficiency of an emailed scan of an invoice, arguing that only the original could render the invoice due and payable. The Aachen District Court disagreed and on January 9, 2018 issued its de­cision under docket number 41 O 44/17, available in German from the North-Rhine-West­fa­lia justice portal. The court lists the applicable tax regulations as well as court de­ci­si­ons including a 2017 ruling by the Supreme Court for Tax Matters.