I know we beat Panama, but this is a bit excessive. (These ads appeared in Metro on June 21, when thee was little expectation of the later win over Panama). 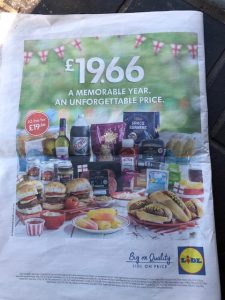 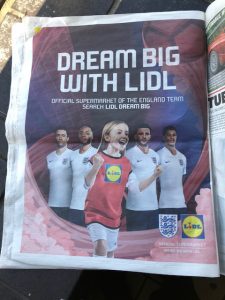 Although we know about the abstraction principle in German contract law, we don’t often have to translate it.

Here is Markesinis on the principle:

We now come to what is one of the most intriguing peculiarities of German contract law. Indeed, Zweigert and Kötz, in their treatise, An Introduction to Comparative Law, p. 71, regard it as so distinctive as to argue that it gives the German legal system its characteristic style. … Many common lawyers, and indeed French lawyers,might be tempted to describe it more than just ‘distinctive’. ‘Un-necessary’ and ‘excessively abstract’ are words that have often been used; and not with(out) some justification.

German law notionally distinguishes between the legal transaction that creates the relationship of obligation (Verpflichtungsgeschäft) from (sic) the legal transaction which transfers, alters, extinguishes, or encumbers rights (Verfügungsgeschäft = disposition contract). This distinction is accompanied by an important sub-rule: the validity of the second transaction is independent from (sic) the validity of the first.The first tenet is known as the ‘principle of separation’ (Trennungsprinzip), while the second is referred to as the’principle of abstraction’ (Abstraktionsprinzip).

Even the act of buying a newspaper, in German law, consists of two stages: the intention and the reciprocal handing over of paper and money.

The closest idea in English law is found in conveyancing, where the parties exchange contracts to buy/sell and some weeks later the property and payment are exchanged.

In my translation, the situation was that the Kausalgeschäft (= Verpflichtungsgeschäft) underlying a gift of money in return for a promise not to seek further payment was invalid, and so the gift was invalid too.

ProZ is often helpful here.  As long as you understand the German legal point, you can see which answers are helpful, just as when trying to find help in Dietl or Romain.