I haven’t got much time to post at the moment, so here are some photos from the Black Forest.

This one is black and white because I pressed the wrong knob on the camera: 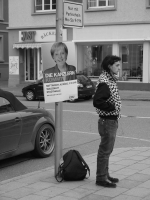 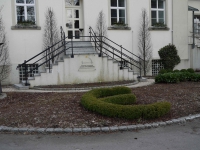 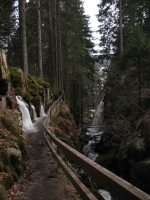 A view of the Alps: 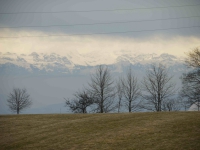 This cathedral (apparently called Dom in the sense of dome) has the third largest dome in Europe, after St. Peter’s in Rome and Florence Cathedral: 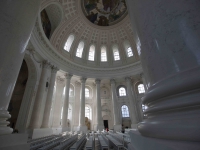 Perhaps Perfumes, by Tania Sanchez and Luca Turin. Here is a link to a later book of the same kind. A good read.

A bit late this link, but this week the Guardian has started examining some European countries, starting with Germany – see neweurope. More detail here.

There seem to be more articles every day. I noted in particular some articles on German literature, with more suggestions in the comments (Join the new World literature tour to Germany). Then one on the life of a German family:

Back home, Gerrit opens some lovely Hassaröder Pils beer, while Katleen, in a rare lapse of taste, drinks Beck’s. They put on a CD by a German R&B singer called Joy Denalane. To my ears, it sounds as authentically uninteresting as its English-language counterpartsz. “For me, one of the great things about the past year is that German-language music is becoming popular,” says Gerrit. Fair enough, but the current German top 10 is all in English, even when the songs are sung by Germans.

On the kitchen shelves, there’s a nostalgic East German cookbook, teeming with pictures of men in feather cuts at the wheels of Trabants, and recipes so stolid that subsisting on them would make you look more like Helmut Kohl than a member of the DDR’s gymnastic team.

There’s a hisory of German cinema in clips (including a very long clip, nearly two hours long, from Leni Riefenstahl’s ‘Olympia’ – presumably the whole film – Jesse Owens in first heat at just after 38 mins.), on the war against anglicisms
, on the piecing together of shredded Stasi documents in Zirndorf, and an at-a-glance guide to Germany. And a lot more.

Coming soon, for one week each: France, Spain and Poland.

The Frankfurter Allgemeine Zeitung on Karl-Theodor zu Guttenberg after his eventual resignation:

Germans use the term shooting star to refer to a rising star rather than a falling one, so he has now become a ‘former shooting star’. See earlier entry of May 2007, quoting an interview with Hilary Hahn in which she was surprised at Gustavo Dudamel being described as ‘the shooting stare from Venezuela’.

I you do a Google search for Guttenberg “shooting star”, you get over 235,000 ghits. Although the number of those in Germany should be falling now.

The US Supreme Court recently decided a case in which language was discussed on the basis of corpora. The question was about the words person and personal.

The decision was FCC v. AT&T Inc.
(PDF file), decided on March 1. This is a slip opinion, which means it has not yet been officially published. It has a headnote, which they call a syllabus.

The situation was that AT&T Inc. claimed that as it was a person (all corporations are persons), it could rely on the right of personal privacy.

Language evidence was presented to show that it does not follow from the noun that the related adjective has the same meaning, particularly in compounds.

In fact, “personal” is often used to mean precisely the opposite of business-related: We speak of personal expenses and business expenses, personal life and work life, personal opinion and a company’s view. Dictionary definitions also suggest that “personal” does not ordinarily relate to artificial “persons” like corporations.

I can’t help feeling that the Supreme Court would have come to this conclusion even without the language evidence. It seems pretty obvious to me. But the definition of person has been expanded in recent years, and at all events the Court of Appeals for the Third Circuit found in favour of AT&T.

We disagree. Adjectives typically reflect the meaning of corresponding nouns, but not always. Sometimes they acquire distinct meanings of their own. The noun “crab” refers variously to a crustacean and a type of apple, while the related adjective “crabbed” can refer to handwriting that is “difficult to read,” Webster’s Third New Interna-tional Dictionary 527 (2002); “corny” can mean “using familiar and stereotyped formulas believed to appeal to the unsophisticated,” id., at 509, which has little to do with “corn,” id., at 507 (“the seeds of any of the cereal grasses used for food”); and while “crank” is “a part of anaxis bent at right angles,” “cranky” can mean “given tofretful fussiness,” id., at 530.

To see what linguistic evidence was presented, you can look at Neal Goldfarb’s amicus curiae brief, which ca also be found via his blog.

This amicus brief was filed on behalf of Project On Government Oversight, the Brechner Center for Freedom of Information, and Tax Analysts. The parties have to agree to a filing. The brief lists the dictionaries and other works cited. A partial quote:

The brief relied on three corpora: the Corpus of Historical American English (COHA), the Corpus of Contemporary American English (COCA), and the TIME Magazine Corpus, all of which are the handiwork of Prof. Mark Davies at Brigham Young University. What we did was to search for the string personal [NOUN], in order to find out what words most frequently filled the NOUN slot.

This decision seems correct and well-founded, but I can’t help wondering whether all judges can be relied on to interpret corpus evidence properly.

Via Mark Liberman on Language Log, who links to other weblogs on the topic.

This is difficult. Maybe Black’s Law Dictionary, with 1800-odd pages. A Suitable Boy, by Vikram Seth, has only 1400. Then there is Uwe Johnson’s Jahrestage, but that doesn’t count, because it’s two volumes.