This is a stenotype machine producing paper notes. It simultaneously produces an electronic duplicate of what is contained on the paper notes. The electronic notes are fed directly into a computer that translates the notes into English. The reporter reviews and edits the translated material on the computer screen, then makes a direct printout of the transcript. The technology
greatly speeds the production of transcripts, while also making transcripts immediately available on disk for interested parties.

There is a picture of some steno machine output and description of it at this site for distance learning of court reporting.

Complete transcripts of court hearings are something you encounter in English and U.S. courts, but not in German courts. The O.J.Simpson trial showed a court where attorneys and judge saw the transcript on their computer screens almost in real time. And the Hutton Inquiry (investigating the death of David Kelly), as already mentioned, is using a lot of the latest technology.

The Times online (registration is free) has an article by Richard Susskind, who writes on IT matters, on the Hutton Enquiry technology.

It gives a link to www.livenote.com about transcriptions.

Lord Hutton and the eight legal teams have had continuous access to these transcripts and images of evidence in a court reminiscent of a Nasa control room, with 44 desktop flat screens and four large plasma screens.

The public has had remarkably open access to the transcripts and evidence through the inquirys website, designed and maintained by the Court Service and the Department for Constitutional Affairs … Since mid-August it has had, on average, 10,000 visitors a day.

Here is a transcript of Lord Huttons opening statement.

A few years ago it was hard to get transcripts. Now many are free at the www.bailii.org.uk site.
Here is a transcript of the case known as MacLibel, described as: 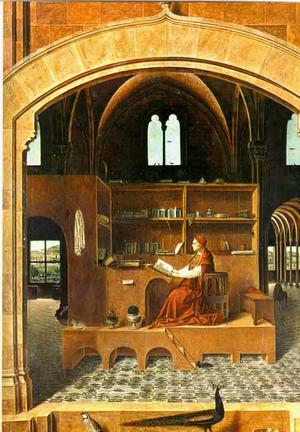 (Click to enlarge)
Painting by Antonello da Messina, Naples, 1460. Here’s an account of St. Jerome (Hieronymus) in German, and here in English. (At the latter site, the translators’ hall of fame seems thinly populated – only Jerome and Jean François Champollion, who deciphered the Rosetta Stone). I once had a copy of an old painting or woodcut showing Jerome making mousetraps, but I can’t find that.

The Contracting and Organizations Research Institute at the University of Missouri has a searchable database of contracts:

bq. The CORI K-Base is a growing Knowledge Base of Contract information, featuring a library of executed contracts and contract forms for a wide array of transaction types and industries. Over 10,000 contracts can be accessed using our full-text search engine. First-time users must complete a free registration.

(Via LawSites). I haven’t investigated it any further. These databases can be useful if you’re translating a U.S. contract and you think there’s an error in it – then you search for the boilerplate and find similar examples, which usually throw light on what’s missing. Or alternatively, if you’re translating into American English, you can find standard boilerplate (I prefer not to adapt a translation too far to the target legal system, because it’s about German law, not English or American law, but where boilerplate is similar, I like to collect it). Google will also help if you enter apparently defective contract language – a clustering search engine will not be so useful here.

This was on 21st September.

Das Lochnersche Gartenhaus – Daniel Lochner’s summer house (villa? manor house?)
When it was enlarged in 1700, it was surrounded by gardens and fields. Lochner was a priest who had two huge baroque gardens in Fürth. Now it’s surrounded by houses, but it is being restored (more like rebuilt).
You can see the tower (onion dome to be replaced), one of the round tower windows from inside, and some wall painting from the second floor showing a cow (left) and a waterfall (right). In September 2004 it will be possible to see the walls after restoration.

During excavations, the local archaeology group found two baroque wells. They were quickly investigated and some finds were shown in a glass case. After about ten days they were filled up again – the dig had reached an unpromising layer of sludge.

There is more (in German) at the site of the Altstadtverein.

The well is a Bodendenkmal. Romain’s law dictionary DE>EN has ancient monument found in the ground. It sounds a bit clumsy, but ancient monument is correct – the term normally refers to uninhabited structures and can include things like wells:

bq. By definition an ancient monument may be any building, structure or work (above or below ground), any cave or excavation, or the remains thereof; also included are sites comprising vehicles, vessels or aircraft. A schedule of such monuments is drawn up and maintained by the Secretary of State for the Environment.

The German Länder (states) have Acts for the protection of ancient monuments (Denkmalschutzgesetze). They define Baudenkmäler (buildings), Bodendenkmäler (found in the ground), and bewegliche Denkmäler (hmm – movables).

And then there are Ensembles – can they be called ensembles in English? – groups of buildings that form a whole.

This was on 19th – 20th September, so I am late in recording it. I wanted to set out the pictures with MTGrid, but at the moment it is beyond me.

Re-reading this sentence from a September 26 entry:

And former Liverpool legend Ian Rush revealed a possibly flawed adaptation strategy at his new club Juventus when he bemoaned the fact that living in Italy was like living in a foreign country.

Now, researching the subject on the Internet, I find a number of collections. A Wikipedia entry defines it, and reminds me of Yogi Berra, the U.S. equivalent. Wikipedia links to an entry on damaging quotations, which means Bushisms, Quayleisms and the like.

Here’s one Colemanballs collection. I’m not sure if there’s any copyright in these – really, Private Eye collected some of them. It begins:

“And here’s Moses Kiptanui – the 19 year old Kenyan, who turned 20 a few weeks ago” (David Coleman)
“Its a great advantage to be able to hurdle with both legs”
“And with an alphabetical irony, Nigeria follows New Zealand”
“There’s going to be a real ding-dong when the bell goes.”

And this one seems slightly out of place, but returns to the topic of British football players abroad:

“I was shocked when I was first introduced to the fans because they brought out a sheep, cut its head off and then smeared blood over my forehead” – Manchester United’s Ronnie Johnsen on life with Besiktas, Turkey

The Irish law blog, maccann.com, has an interesting entry on plain English for lawyers. It links to a report on the Law Society of Ireland’s new Plain English Guide to Legal Terms (link updated Dec 2015). The Guide acknowledges Kieron Wood and his glossary of legal terms simplified.

Maccann’s main point is that legal documents are hard to understand and plain English may give a false sense of understanding. He doesn’t deny that complex contracts can be written in plain English, if enough work is put into them, but he denies that the full meaning of the document can be understand by reading it through.

bq. If you think that legal writing ought to aspire towards honest-John tabloid-ese or towards so-called “literary” elegance, you’re a daydreamer with a fondness for soft targets.
And you know little about the limitations of language and less about the realities of business.

Reading this sends me off on a tangent. Books on plain English and on legal style can be helpful to translators: they often make it clear how far doublets and triplets can be rendered by one term, where legalese is jargon replaceable by something more straightforward, and where there are terms of art.

But translation brings other problems. Clients sometimes actually want the archaic language, not for the reasons Maccann mentions, i.e. for clarity or because it’s less deceptive for the client, but so the translation ‘sounds legal’. Sometimes I know that a German lawyer I am working for is going to think I don’t know my job if the translation is not peppered with law Latin. And of course, if I prepare a less jargon-ridded version, I too might be persuading the reader that he or she understands the text. After all, wondering about whether to use pursuant to or under merely scrapes the surface of meaning.

Clarity is an association with a journal to promote plain English. The somewhat outdated website does contain articles on the topic. There is also a links page and some articles.

Further to yesterday’s entry, Translate This! gives a link to a BBC page for the European Day of Languages that presents a snapshot of 35 European languages.

Today, September 26th, is the European Day of Languages. I discovered this by accident last week. It’s a spin-off of the European Year of Languages, which I do remember. The Council of Europe has information on it. Here’s the calendar showing more than 500 events from 40 countries:

Shame about that. There was also a competition for a slogan for 2004 – winning three entries were Pack an extra language in your luggage; A world for living, languages for sharing; and Languages: a rainbow of colours and cultures. I find these mildly depressing

CILT has a page of what it calls ‘Celebrity linguists’, but not all of them actually say they speak a foreign language – some just think it’s a good idea.

The link to Linguist Online didn’t work either, but an abbreviated version took me to an article by Dan Brennan about how foreign footballers cope with language difficulties in their new country. (The Linguist is the journal of the Institute of Linguists):

bq. … for British players moving abroad, inability or reluctance to learn the language of their adopted country has often proved a major stumbling block. On being quizzed by the Italian media, Paul Gascoigne could, notoriously, only manage a belch by way of riposte. And former Liverpool legend Ian Rush revealed a possibly flawed adaptation strategy at his new club Juventus when he bemoaned the fact that ‘living in Italy was like living in a foreign country’. It will be interesting to see whether David Beckham will take a more enlightened approach at Real Madrid.

Perhaps I can pull myself together for St. Jerome’s day on September 30th (if I remember it).

Vertretbar.de (Sascha Kremer) reports that there has been a test of services offered by German local authorities online. I didn’t even realize you could register a change of address online. That would be very welcome. However, Fürth is described as ‘could do better’ (verbesserungswürdig), while Nurember gets top marks (vorbildlich).