You can see the big A for Apotheke in this photo of the Rathaus (reflected in the big Apotheke window).

Buurtaal wrote about this phenomenon a few weeks ago (in German – here’s an English article about the subject).

If you buy something, most of these chemists (pharmacists) give you a small present. A pack of paper handkerchiefs is good. The worst is if you get something really expensive, like tablets for 600 euros, and they feel obliged to give you something ‘valuable’ that may be not to your taste. There’s one down the street here that gives tokens (Taler) which you can use to buy half a roll at a local bakery and so on. I just hand the tokens back – my life is complicated enough already.

This week, the Hirsch Apotheke gave me a small soap in the form of the A for Apotheke. I am very pleased with this because it is so bizarre. 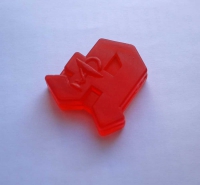 This is difficult. I tend to forget covers and look at the inside of a book. Sometimes I hesitate to buy a book with a cover showing the actors in the latest TV or film adaptation, especially if I read the book before it was adapted.

Most covers seem to date. Possibly a foodie book, like Jennifer McLagan’s Fat – you can see a picture of the cover in the right margin here.

Wolf Hall, by Hilary Mantel, which I read last year. In fact, I was on the ferry from Dunkirk and they had no English Sunday papers, and I had nothing with me, and this was the only book they had I could face reading. It was a great read. I know the author is working on a sequel, but in the mean time she was ill – she wrote a hospital diary for the LRB.

Am I really only halfway through this meme? Must press on.

Here is my second colleague’s book. The photo is not too good. 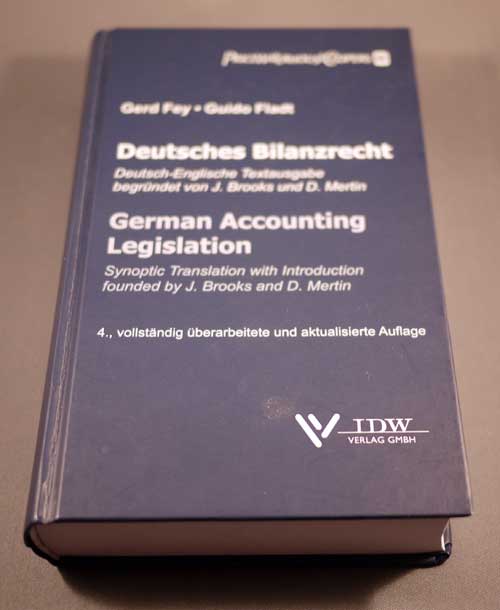 This is a synoptic translation: the original German on the left, sometimes descriptive, sometimes parts of legislation, and the English version, by Fry & Bonthrone Partnership, on the right.

I must say I haven’t used this much. I used to use its predecessor quite a lot, but that was in the days when I actually translated German accounting texts. Since then I think the translation of accounts between German and English has become more specialized, and the subject has become more complex with the introduction of the IFRS – this book has a nice table comparising IFRSs, US GAAP and German Accepted Accounting Principles, but there’s lots more reading out there.

Anyway, this is the Bible on accounting translation from German to English. And I actually used it in December when I had a short urgent job containing a small balance sheet from Switzerland, but only to remind me of what I ought to know.

If you want to buy this, at 48 euros, note that it dates from 2005 and there may well be another edition in the pipeline – but of course, nobody knows how long a pipeline is, especially with publishers (my personal bugbear is the new edition of Volker Triebel et al. Englisches Handels- und Wirtschaftsrecht, which if we are very lucky, and rich, we may get before Christmas, but it has been promised for years – the publisher says ‘third quarter 2011’). In fact I heard that there may be a new synoptic work coming out covering German GAAP, the Bilanzrechtsmodernisierungsgesetz and IFRSs.

One thing I regret about this book is that it lacks an index. In fact, every time I open it I look for an index, but there never is one. At the same time, it’s extremely complex and long and indexing would be a nightmare.

Unfortunately I won’t be in London next Wednesday, but I have stolen this announcement from a mailing list:

Talk outline: The Cultural Turn in Translation Studies has brought about an understanding of translating as a complex cultural activity which raises difficult questions about how to handle culture-specific assumptions. Translators are confronted with the asymmetry of thought systems, the relativity of concepts, and have to deal with inconsistent categorizations and classifications. Their task as cultural mediators is to adequately communicate information about a foreign culture specifically taking into account the divergent previous knowledge and divergent expectations of the target audience in order to avoid misunderstandings.
Exploring the particularities of legal contexts, this presentation discusses the specific challenges of translating law to achieve transparency in global legal discourse.

Biography: Sieglinde E. Pommer is currently APART-Scholar at Oxford Law Faculty. A member of the New York Bar, Sieglinde holds doctoral degrees in law and translation studies from Vienna, an LL.M. degree from Harvard Law School, and the Diplôme Supérieur de Droit Comparé from Strasbourg. After internships at the ECJ and the WHO, she was a post-doc fellow at Oxford, Geneva, McGill, and Harvard, and Visiting Professor of Law at the University of California. Sieglinde served as EST Secretary-General from 2007 to 2010. Her dissertation on the complex relationship of comparative law and legal translation was awarded the Figdor Prize 2006 by the Austrian Academy of Sciences.

For a complete list of seminars for the academic year 2010-2011, visit: http://www3.imperial.ac.uk/humanities/translationgroup/guestspeakers

I have had this book for a couple of years but not found time to read it. It is only about 170 pages long and large parts describe the subject, but it’s rather academic (naturally).

Well, maybe just one more picture from this morning.

I gather it’s Squirrel Appreciation Day in the USA, so here are my most recent squirrel photos: a red squirrel in Fürth in November, and a grey squirrel in Upminster in December. I won’t be making an annual event of this, though. 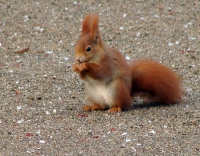 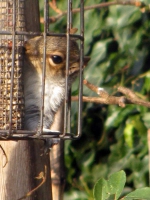 Some readers were keen on the cheddar. This is not really really high-class mature cheddar, but it is very pleasant nevertheless. They also have ginger nuts, which are hard ginger biscuits you may want to dunk in tea or coffee to soften. The fish and chips is made with a German favourite, Seelachs – literally sea salmon, but actually coley. We used to feed the cats coley, but then before WWI my mother’s family used to feed the cats on tinned pink salmon. I think coley and pollock are getting more common in the UK now, to protect cod, but I can’t really see it as authentic. I do not know what their marmalade is like. The caramel shortcakes are a recent invention craze and I am afraid I may get some. They have baked beans too, but I have no trouble getting those here. 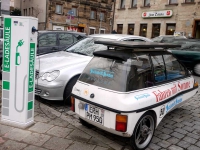 In late 2010, the series Downton Abbey, set between 1912 and 1914, was very popular, and when I eventually saw it I enjoyed it a lot. It’s like Gosford Park, which had the same director, but easier to understand. For instance, in Gosford Park I knew who the murderer was, but I had to see the film three times before I knew why various people were under suspicion, or who was married to whom. In Downton Abbey, everything is clear.

I am excited to see if it’s dubbed into German, but at all events it’s been edited a bit for the USA. Some changes were made: about 2 hours of adverts were cut, and then some minor changes were made to divide it into a logical number of parts with appropriate beginnings and endings. But the Daily Mail had a silly article in which it claimed that the series had to be radically simplified so that Americans could understand it.

For in the land of the notoriously short attention span, TV executives have taken a knife to the artfully crafted series, slashing its running time and simplifying the plotline for fear viewers will be left baffled. …

The show’s ten million British viewers will be well aware that much of the drama revolves around challenges to the ‘entail’ – the legal device which determines how the estate should be divided up – after Lord Grantham’s heirs perish on the Titanic.
But Ms Eaton said: ‘We thought there might be too many references to the entail and they have been cut. It is not a concept people in the US are very familiar with.’
However, that did not seem to faze British viewers, who would have been similarly unaware of the term before watching the series.
PBS also believes its audiences will need an American to outline the key themes of the show.
So before the first episode, actress Laura Linney will explain the inheritance principle.

One wonders how the Americans have understood all the Jane Austen films if they don’t understand an entail.

Tabloid Watch (the UK equivalent of BILDBlog) put it right. It quotes Jace Lacob, who was interviewed by the Daily Mail reporter and ignored – he actually explained that the two-hour cut was removal of advertising, but this information was not used.

Anyway, what is an entail? (emphasis on the first syllable) I found some explanations for Downton Abbey online, and two referred to primogeniture as a definition. Actually, primogeniture is really something else. There are societies where by law or custom it is normal for the eldest son to inherit the estate. But an entail is usually created by will, not by law, and provides that the eldest son and his heirs inherit, binding the property (land and buildings are the main thing) for generations.

One aim of both primogeniture and the entail is to keep land from being split up into ever smaller bits. The person currently holding the land was a tenant for life and as long as the entail existed, he (it was normally a man, by the terms of the entail) could not leave the estate by will. He was subject to laws requiring the property to be looked after, although this presupposed being able to afford it (e.g. making forests sustainable – the estate might be very large).

Estates like entails existed in England from about 1200 on, and protected from 1285. The oldest version was called a fee tail, which means literally ‘a restricted interest’ (Latin: feodum talliatum). ‘Entail’ has the same origin. Various kinds of wording created an entail – I won’t go into that now – and there were various methods of barring the entail (putting an end to it), which did not always work.

Since 1925, entails can only exist as trusts, and they can be barred. But Downton Abbey is set in the years before the First World War, so to see how possible it might have been to bar the entail, one has to consider the Fines and Recoveries Act 1833. It looks to me as if the life tenant, Robert Crawley, Earl of Grantham, could have barred the entail, but in fact he decided not to, because he did not want the estate to be broken up. My old copy of Cheshire’s Modern (sic) Law of Real Property says:

Disentailing Assurance: A tenant in tail in possession and of full age may, without the concurrence of any other person, effectually bar the entailed interest and thereby enlarge it into a legal fee simple by adopting any form of conveyance which is sufficient to dispose of a fee simple estate in land, provided, however, that in the case of an inter vivos disentailment the conveyance is effected by deed.

And since 1996, it has been impossible to create an entail, even as a trust. If you write in your will that you leave the estate to your ‘heirs of the body male’, the wording that used to create an entail, it will all pass absolutely to the first ‘heir’ (actually, the word ‘heir’ is not used in England law any longer, but this is the old wording). Some entails still exist but will die out. They even exist in some U.S. states.

Here is what Dietl-Lorenz has on the term: