Philip Oltermann was still at school when his parents decided to move to London and take him with them. He was not too keen at first, but after trying England for a year he decided to stay, instead of returning to Germany to do the Abitur.

There’s an interview with Philip Oltermann at Granta in which he reads from his memoir piece for Granta, describing his arrival in the UK with his parents at the age of 16 and the gradual failure of the British sash window and absence of the German mixer tap. (I myself have suffered many years of visits to hardware shops looking at mixer taps with a brother visiting from England). He also talks about how English became his first language and about writing on the book which has now appeared. He says that he felt he was too young to write the book as a ‘memoir’ and so it is a history of Anglo-German relations. Here are the chapter titles (capitalization sic):

In fact I can see what Oltermann means: perhaps the occasional nuggets about how he gradually became accustomed to British schools and schoolboys and life in Britain in general are more the material for a Sunday paper than a full-length book, but they were the most interesting part and I found myself searching them out.

It was a problem for me that the book is written for English speakers who don’t know much about Germany. And yet, the most likely readers might be those who do know something about Germany. Thus, in the chapter on Freddie Frinton, one has to wade through a lot of basic description and narration in order to get to the personal bits. And actually, the style gets heavy and routine when filling in the historical background. And it is, after all, a heavy task to describe the Baader-Meinhof Group to an English-language readership. I wonder how much of this is the fault of an editor who thought the personal experiences ought to be shored up with some heavier stuff.

Trivia note: I see Oltermann gives Watership Down as evidence of the British love of boats and water (it was incorrectly translated into German as Unten am Fluss).

Katy Derbyshire beat me to reviewing the book in her blog love german books, but I wrote the above before reading the review. She nails down as over-generalization some of what Oltermann says about the sexual obsession of teenage English boys. Read Katy’s review for a deeper discussion. She says his book is being translated and adapted for Germany.

The Wall Street Journal Law Blog reports on a Supreme Court decision on the definition of interpreting. A 1978 federal Act (the Court Interpreters Act) permitted the winner of a case to have interpreting expenses paid for by the loser. Did this include translated documents? The court said no.

Justice Alito said translating documents doesn’t count as interpretation. His reasoning relied heavily on dictionaries current in 1978, most of which defined an interpreter as one who translates oral communication. The Oxford English Dictionary included a definition of an interpreter as one who translates “books or writings,” but described that definition as obsolete, Justice Alito wrote.

… While other appellate courts had found that “interpreter” includes translators of written material, Judge Posner ruled otherwise in 2006, prompting the Supreme Court review to resolve the conflict. Justice Alito cited Judge Posner’s comment that no one would refer to the translator of the Iliad and the Odyssey as an English-language “interpreter” of those works. Chief Justice John Roberts and justices Antonin Scalia, Anthony Kennedy, Clarence Thomas and Elena Kagan joined the majority.

I’m surprised these people understand the difference beween an interpreter and a translator, so often do we read of translators where interpreters are meant.

The WSJ post includes a link to a PDF file of the decision. 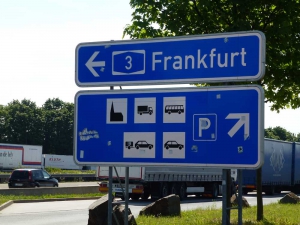 Here’s the one at Medenbach near Frankfurt am Main: 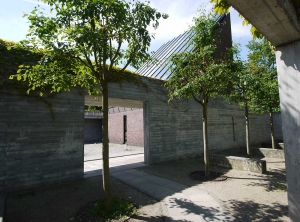 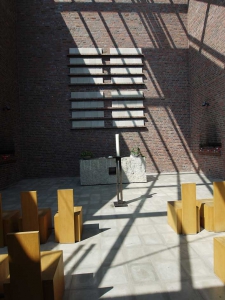 They had a useful brochure showing all the motorway churches in Germany. You can see them here – Medenbach is number 16. I’m sorry I missed the right turn-off for number 20, which I also passed – it’s more impressive than I realized, but also in the middle of the heavy goods vehicle services station, and you can scarcely move for lorries on Sundays and public holidays.

Ascension Day is also Father’s Day in Germany, and Father’s Day is celebrated by groups of men of all ages, including many who aren’t fathers, dragging carts of alcohol around the country.

I even saw these when I arrived back home today, virtually outside my building: 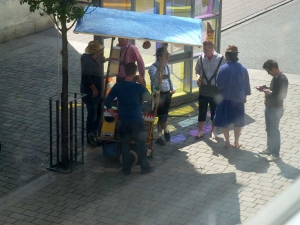 The coloured glass object in the background is unfortunately a work of art, possibly put up to limit traffic entering the pedestrian zone. The red and white triangular pattern on the cart mark it as Franconian.

Here are two engaged persons in Aachen yesterday, at least one of whom was preparing to go on a trip of some sort today: 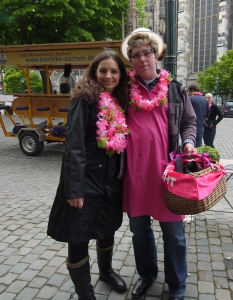