Mark Liberman at Language Log establishes that the noun phrase ‘bright line’ and the adjective ‘bright-line’ are missing in most general English dictionaries:

bq. Here’s another common expression that’s not in the standard dictionaries: bright line, in the sense of “clear criterion of demarcation”.You won’t find it in the American Heritage Dictionary (fourth edition), Merriam-Webster’s Unabridged (third edition), Encarta, or the Oxford English Dictionary, but it’s widely used these days. Google has 193,000 hits for “bright line”, a substantial fraction of which seem to be instances of this expression. Searching today’s Google News brings up 104 examples, and Technorati finds 20 blog examples in the past three days.

As he says, you can work out the meaning from the Google examples.

bq. (Though Merriam-Webster’s Dictionary of Law, 1996 edition, has no entry for this term.)

Still, it can be found. German general dictionaries have a special rule of not allowing specialist terminology in. So the German equivalent of ‘bright line’, if there were one, might be found in a German law dictionary like Creifelds or Alpmann-Schmidt, but some verbs and adjectives with a specific use in legal texts won’t be found anywhere. To say nothing of Austrian and Swiss terminology that you can’t even find in Austrian and Swiss law dictionaries.

I have now found an entry in Garner’s Dictionary of Modern Legal Usage:

bq. bright-line rule = a judicial rule of decision that is simple and straightforward and that avoids or ignore the ambiguities or difficulties of the problems at hand. The phrase dates from the mid-20th century. The metaphor of a bright line is somewhat older than the phrase bright-line rule – e.g.: “The difficult part of this case comes with regard to … the activity of the Board of Temperance ….A bright line between that which brings conviction to one person and its influence on the body politic cannot be drawn.” Girard Trust Co. v. I.R.C., 122 F.2d 108, 110 (3d Cir. 1941)./”[T]he McCambridge majority opinion … agrees that the Kirby bright-line-rule is but a mere formalism ….” J.G.Trichter, Bright-Lining Away the Right to Counsel, Tex. Law., 6 Nov. 1989, at 26. Cf. hard and fast rule.

A statute to change a term in earlier statutes is apparently unable to summarize this in two paragraphs, but instead takes 23 pages to describe each individual change in every grammatical case.

When I translated a brochure for the Wartburg including a description of the collections, I had problems finding a term for Martin Luther’s Reiselöffel. This just shows how hard things were before the Internet, because today I can find all kinds of folding spoons, but then, the term didn’t occur to me until it was too late. 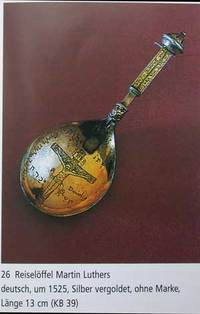 Not only are there plastic spoons:

but there are even fake medieval spoons for your medieval table:

Then again, one could go straight to a lawyer whose hobby is spoons (lots of spoon links).

(Via Udo Vetter – see also this link, given in the comments, with a picture of the largest spoon carved by Horst Wesemann)

bq. If m’lud in future can’t tap an index finger to his temple to indicate that he thinks a witness is a complete raving loony, it seems a poor state of affairs. One of the primary weapons a judicial system has against the criminal classes is fear. Let us put it bluntly. The more quixotic judges are allowed to be, the more bloody frightening they are. It’s no good having courts run by calm, objective non-entities.

IPKAT reports on the evidence relied on when the application to register ‘Dykes on bikes’ was refused. Apparently there were over 400 pages of submissions, but the US Patent and Trademark Office relief on two dictionary definitions. One of these was from an online version of the 1913 Webster’s dictionary (whatever that is – was ‘Webster” copyrighted then? because it isn’t now). The online version included arbitrary additions, however, bearing the tag of Patrick J. Cassidy:

bq. Terms in the dictionary bearing his “tag” indicate that they were not, in fact, part of the original dictionary he had transcribed online but rather something that he himself had arbitrarily added. So in essence, the PTO relied on a definition that was created at random by someone not at all associated with Webster’s dictionary. The second definition the PTO relied on came from an online dictionary of Spanish slang that listed “dyke” as a “vulgar word.” Once again there was no accountability for the definition — it was just one person’s site giving what they consider vulgar words in Spanish.

Previously approved trademarks include Hustler’s Young Sluts, Psychic Phone Whores and Psychobitch, which all contain words regarded as vulgar by that dictionary.

There must be a doctorate going on the topic of judges and dictionaries.

Ectaco SpeechGuard is a handheld interpreting device based on something used by the US military. PCWorld’s Digital Duo demonstrate it and ridicule it in a video clip. (The clip starts with an ad. Scroll down to ‘Speaking in Tongues’ if you don’t get the video first time.

If you go to the Ectaco site, there is a lot more information and there are special models, such as the Attorney SpeechGuard.

* Thousands of instructions and questions on the following topics: Appointments, Definitions, Basic Interview, Fees, Sentencing, Motor Vehicle Interview, and Criminal Interview
* English speech recognition that recognizes 700 different speech patterns and can learn and adapt to anyone’s voice.
* Search for single words or whole phrases.
* Easily operate your unit with a touch-screen or navigational buttons day or night!
* Access your most frequently used commands and phrases conveniently in My SpeechGuard.

And there is a Law Enforcement SpeechGuard:

# Have you ever pulled someone over for speeding who didn’t understand why because you don’t speak their language?
# Have you ever tried to get answers quickly to help resolve a situation and needed participation fast? Has that ever complicated the cooperation with non-English speaking civilians wanting to help you?
# Do some non-English speaking residents feel like you are not really trying to help them?
# Are you often misunderstood in ethnically diverse communities because of language barriers?
# Have you ever been frustrated waiting for a translator to arrive and assist?

bq. If you answered YES to any of these questions, SpeechGuard PD-4 can turn those answers into NO.

I’m trying to picture the SpeechGuard in one of those uncomfortable situations where a car is stopped and you wonder if someone’s going to shoot (seen too many American films).

(Thanks to Chris Durban, whose Onionskin column appears in the ITI Bulletin and the ATA Chronicle, who posted this on www.flefo.org.

From a chemist’s shop window near the Rathaus, this evening 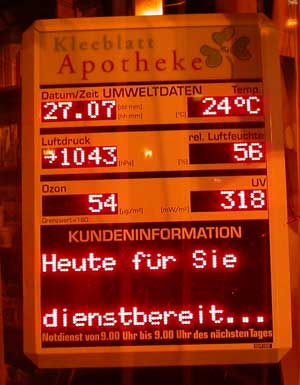 Somehow I don’t think that when Thomas Browne wrote ‘Urn-Burial’ he was thinking of the situation in Germany. You can be cremated here but after that you have to be buried!

bq. Great princes affected great monuments; and the fair and larger urns contained no vulgar ashes, which makes that disparity in those which time discovereth among us.

An interview in Focus indicates that Saxony-Anhalt is considering relaxing this legislation. (So does that mean that the law of burial, like that of translators and interpreters, is a matter for the Länder?)

I love the way they say people will be able to put their next of kin’s ashes on the bookshelf. This is a sort of stereotype idea of how weird it would be not to bury the ashes.

This reminds me of the joke: ‘Mit ihm ist ein erstklassiger Anwalt gestorben.’ – ‘Was, zwei Männer in einem Grab?’

(Via Udo, who also links to this)

If you are going into law and can’t manage the numeracy of the last entry, you might consult this firm (did they not take part in spelling bees?)