This is a warning in case any other readers of Vibeke Lind’s Knitting in the Nordic Tradition are passing by. This is a Danish book that has been translated into English by Annette Allen Jensen and of which I managed to secure a second-hand copy.

It has a lot of useful material, and it was probably my fault that I was misled by this diagram and photo – I thought they referred to the same thing: 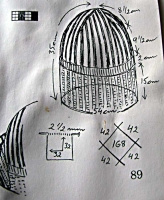 The one on the left:

I did think 15 centimetres was too long, but I didn’t realize till after I’d finished that the cuff is supposed to be turned up twice. I was relying on the photo, in which you can see the black ribbing at the bottom and the black edge at the top of the cuff. (My casting off is a bit dodgy too). 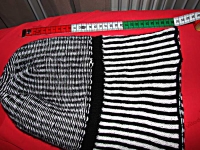 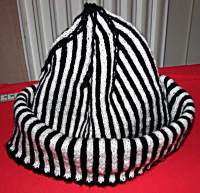 Ah well. Anyone with a long small head need one of these?

I had been practising knitting with one colour held the English way and the other the Continental way, just in case I ever get round to a jacket. 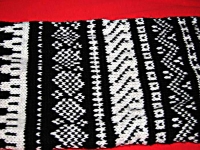 The clergyman Markus Bomhard loves Playmobil figures and created a Playmobil Bible. However, in order to crucify one of the figures, he had first to warm the plastic and remould it, and he put some breasts and a penis on Eve and Adam respectively (I used that ‘respectively’ for the benefit of non-native speakers of English to see how it works). The Süddeutsche reports:

But the Franconian company Geobra Brandstätter object to the alteration of the figures, which they say is a breach of copyright. They don’t mind if someone alters the figures on a small scale, but this pastor actually set up a Playmo-Bibel website (though the SZ reports that when Harald Schmidt changed one of the figures into Hitler on TV, the company took no action). Their lawyers require him to stop using the domain name playmo-bibel.de (he has to call it Klicky-Bibel) and stop printing photos of the figures.

Even the Pope was in favour of the procedure:

LATER NOTE: Roger Heyes on Twitter reports that a Lego version has existed for some years.

The director of the German Literature Archive in Marbach, Ulrich Raulff, thinks that if Schiller were alive today he would not be writing plays but blogging or twittering. He chose plays as the most media-effective form of expression of his day.

This reminds me the correspondence between Goethe and Schiller, which I enjoyed as a set book in my degree course. Could one imagine Goethe and Schiller exchanging letters today? But somehow I can’t see it as a text message exchange. Perhaps they would have blogged (despite Raulff’s view that Goethe was less modern than Schiller).

Tweeted by Markus Trapp of text+blog.

The Onion has a video report on why Franz Kafka Airport in Prague is named the world’s most alienating airport (via Die Zeit).

Another video, or at least audio: Marx / Engels correspondence reading – Harry Rowohlt as Marx and Gregor Gysi as Engels.

This month, LLRX has an article on researching Australian law.

I went to LLRX.com looking for the article on researching French law. There are English guides to many legal systems there, although somewhat outdated since the project was discontinued a few years ago. And Claire Germain’s French law guide can be found in a newer (2004) version at Cornell (another of the great law sites).

World domain map – free to bloggers who blog it.

Before we worried about the Neue Mitte in Fürth (project to create gigantic shopping centre closing in a whole road as putative salvation of local shops), there was the new pedestrian zone.

There was a design, with partly curved stones I believe, and an invitation to tender produced no tenders!

After that the design was simplified.

Then the firm employed ordered stones from China, which did not come.

When the stones did come, there were big gaps between them such as to fell wearers of high heels.

The stones also cracked a bit, suggesting the harvest festival procession may have to change its route.

Shortly afterwards, the bronze rubbish bins were peed on by dogs, I presume, and began to go green.

They disappeared. So did the bronzed bum-freezing little seats designed to prevent large gatherings of non-natives. One or two are still there, but the one outside this building was replaced by a hole in the ground, carefully filled in with stones slightly different to the rest.

Today, in the sleet and snow, scaffolding was put up and a horrible bronzed pole with oval cross section rose. It appears that two such poles are to bear a light. This was the beginning:

After that, attempts to put the light on and erect the second pole seemed to fail. There was a lot of phoning and smoking. Eventually, the solitary pole was covered with a plastic bag:

The other pole was stowed away, and after some deliberation, and even a chat with the police, the crew departed, to warm up indoors if they’re lucky. 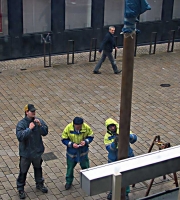 One can only hope the worst.

The Story of Mennard – The edited highlights from the life of a northern barrister – is unlike any other law weblog I know. It is like a worm’s-eye view of life as a barrister, with a strong literary quality and imperfect spelling.

What is there to say :self deprecating Lawyer who cant spell.Thinks he has a sense of humour

There is a gap between the eclectic town house hotel in Manchester where he is staying during a trial and his description of it.

It describes itself as an eclectic hotel which no doubt explains the bath in the corner of the room and the milk that’s gone off in the fridge, the hot tub on the roof terrace that along with the DVD player in my room, is not working .

As News 24 gives way to what passes on the BBC for breakfast TV I draw the curtains to allow some daylight in .

The drawing of the curtains is a feat in itself given the size of the windows and the thickness of material .However it reveals a set of dirty net curtains with a grime reminiscent of permanent smog making it easy to picture young children in the neighbourhood being sent up chimneys to either earn money for their family or search for a Lancastrian Dick Van Dyke dancing on the roof top.

A description of the court too – Manchester Civil Justice Centre.

And the constant nagging irritation that the instructing solicitor, ‘My Best Friend’, is annoyed about Mennard’s fees, while the chambers clerks think the two of them are having an affair.

I ring my clerk. We exchange pleasantries. I ask after him and the Liverpool Fan Clerk who I am pleased to avoid after another glorious weekend of footballing triumph. I try to be witty maintaining my banter even though I’m on another circuit .I need a friend to chat to my wife is at work , my children at school ,My Best Friend frosty.

I ask about My Best Friend

‘Are we doing anything wrong’.

I knew it and it dismays me not only that but clearly chambers think we are having an affair and we aren’t. I will ,after all ,be bathing in the cast iron bath on my own tonight .

Frau Marion Schreiber, formerly the principal of the Institut für Fremdsprachen und Auslandskunde, died on March 7 2009. There was a notice in the Süddeutsche Zeitung of March 14. I can’t yet find any information on the site of the IFA, so this is for any readers who happen to have missed this.

Frau Schreiber was born in Leipzig. Her father died when she was 12. After the war she passed her Abitur, but of ten people in her class, only one went to university. She could not go to university in what was then the Russian zone, later the GDR, because her parents had both studied (they were graduates in librarianship). She crossed to West Germany alone (her mother later followed her) to a contact in Erlangen. There she was a part-time secretary at the institute founded by Dr. Karl Friebel and Dr. Isolde Friebel, and eventually managed to complete university studies in economics. She was Schulleiterin from 1978 to 1993, and after that she remained the treasurer. She originally intended to spend her retirement with Isolde Friebel in Tutzing, but after Friebel’s death in 1992 she lived in Tutzing alone. The funeral was in Tutzing on March 20th.