This weblog will soon be closing down for about two weeks, at which time comments will be closed to avoid spam. 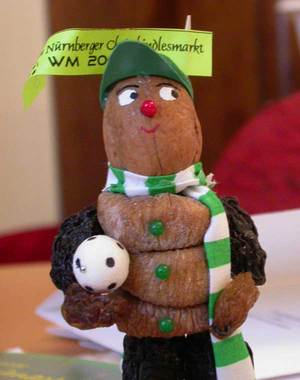 This optician’s on the Grüner Markt in Fürth reminds me of the Optician’s sketch by the Two Ronnies – they would have found an A or a K immediately. 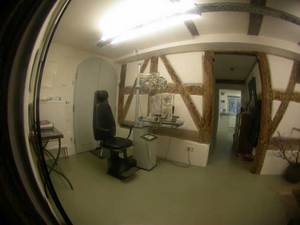 The Nürnberger Nachrichten recently tested Lebkuchen to find the best (I’m surprised the link still works – it probably won’t for long). The result was obvious, but I suppose one must allow them to indulge themselves.

(Following the absolution (of Pope Benedict with regard to Lebkuchen in general – he likes it), Bäckerei Düll of Mathildenstraße 28 leads the field in the very first round. Their white Elisenlebkuchen gets top marks (1): it looks luxurious and perfect, it smells good, and its judiciously measured spices linger on the palate. The chocolate-covered version is also ‘succulent and thick’ (1-). With allspice, cardamom, nutmeg and more, subtle, but with a long finish, the Düll Lebkuchen leads the tester Reitzner to sigh, ‘Really, a whole meal in itself’. And a good one. Quality has its price: five cost 8.95 euros.)

Elisen Lebkuchen is the name of the most expensive quality, only a maximum of 7% of which is flour – the rest is fruit and nuts. The local bakeries make Lebkuchen that is slightly soft and chewy, not dried out.

Eur-Lex is about to change to this interface.

The Times Online also has David Pannick’s review of 2005:

Cartoon of the year was by Pat Byrnes in The New Yorker. One lawyer says to another, Remember, we can only afford to do all this pro bono because of how much anti bono pays.

David Luke, who has died at the age of 84, is described by the Times as:

bq. Translator of the German classics whose versions were regarded in some quarters as being better than their originals.

Some of my translations are better than the original, but they aren’t by Goethe. The comparison was made by Stephen Spender.

bq. According to his own account, it was the realisation that most of his pupils simply lacked the linguistic knowledge to understand and enjoy the great riches of German literature that led him to embark on the sustained work of translation that began with his translation for Penguin of the poetry of Goethe in 1964 and continued almost until his death. His published translations, which included much or most of Kleist, Mörike, Stifter, the Brothers Grimm and Thomas Mann as well as almost all the poetry and much of the prose of Goethe, are likely to be his most enduring literary legacy. …

bq. Eventually he was received into the Russian Orthodox communion. For some years he was an active member of the North Oxford congregation where he sang the Church Slavonic liturgy with great gusto and delight. Finally, however, he found it impossible to reconcile the facts of evil with the hypothesis of a benevolent creator.

There’s an obituary in the Independent too, but it costs money to see it.

bq. Finally, for the moment  here’s a totally unrelated question: shirts have sleeves, right? But what about jumpers? I say they have arms, whereas someone I know here (from London) insists that they have sleeves, just like shirts. Any thoughts?

And here’s the rub: two of his commenters actually agree with him!

This is almost as bad as Germans calling a sleeveless (armless?) jumper a Pullunder.

Is it correct to translate ‘Quel jeu doit-on jouer vis-à-vis des autorités de Californie?’ as ‘What game must we play with the California authorities?’

This question came up for consideration by a United States District Judge recently. He certainly felt competent to answer the question with the help of a bilingual dictionary (I think I could work twice as fast if I had the self-confidence about legal translation that some judges have). I can’t really judge this French, though.

Eugene Volokh writes that French will never rise to the importance of Yiddish in court opinions. Here is a paper on that subject by Volokh and Judge Alex Kozinski

bq. The more likely explanation is that Yiddish is quickly supplanting Latin as the spice in American legal argot. As recently as 1970, a federal court not only felt the need to define “bagels”; it misdefined them, calling them “hard rolls shaped like doughnuts.” All right-thinking people know good bagels are rather soft. (Day-old bagels are rather hard, but right-thinking people do not eat day-olds, even when they are only 10 cents each.) Weve come a long way since then.

bq. My grandfather Sigismund Eduard opened an inn with a Gemischtwarenhandel with its woman Elisabeth in the between wartime and he managed the agriculture. My father Sigismund Albert in the year 1955 harbored the first guests – at that time yet as a bachelor with its mother. Instead of large bathroom, there were Waschschuesseln and water pitcher at the room.

But Power Walking should not have become Power Whale King, should it? Or Golfpauschale Gulf Lump Sum. Or die verschiedensten Wanderwege as the most deceased. 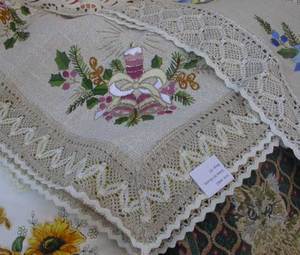 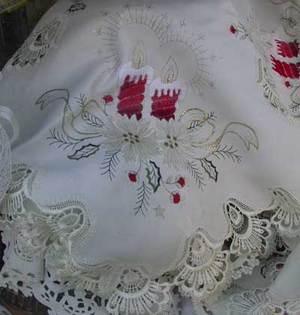 These are German Advent tablecloths. You don’t often see them except in December. Each of the four corners stands for one of the four Sundays in Advent. At the end of the day, the corner for that Sunday is ceremonially burnt, so after the fourth Sunday, there is only a charred heap remaining, and at the beginning of January embroidery starts on the one for the following December.