And scarcely a foreign element – but a pack of Herta export frankfurters.

Arrrr me harteys. Thar be a meatship ahead in the oven…. Floating high on the 17,000 calorie seas, made with Bacon, sausages, pastry, mince, it’s all meat, and it’s coming to rape and pillage your arteries! Har har!

One commenter says, ‘It will never fly’.

Photos by Joel Richards (in Bristol).

Hat tip to Trevor, who says ‘The Germans go on about their bloody sausages, but they lack the
maritime tradition to make something like this’.

They describe their translators as qualifiziert und zertifiziert. They also have geprüfte Lektoren.

I couldn’t help noticing this:

I see they use translation memory, unlike many legal translators. They need to be very careful about the quality of their memory, of course, and also consider the copyright aspects.

Tolingo also has a blog, with a photo of the ‘Team’ of ‘tolinguisten’. They say they pay translators for DE/EN (both directions?) from seven to eleven eurocents per word. 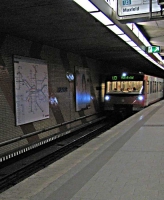 Goethe weilte in Nürnberg! was it in Goethestraße at Maxfeld? 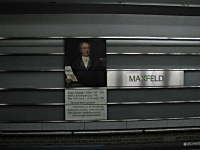 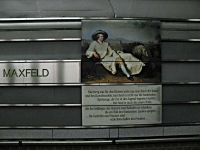 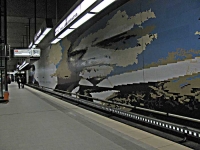 Q. How do you say Queen Mother in German?
A. Queen Mum.

It’s never filtered through that this expression is only used by a few newspapers for effect.

Bianca Jagger lost a valuable ring in Austria. Austrian law requires that the finder be paid 5% of the value of the ring (German law has a similar provision). The finder has taken her to court in Salzburg for slander – she said that he handed in the ring far too late (8 days after it was announced in the press, before which time he thought the ring was worthless). After this civil case, it will be clear whether the finder’s reward is to be paid. It would be 10,000 euros.

Jagger, a human rights activist, made an alternative offer in November to pay 9,000 euros to Amnesty International and the remaining 1,000 euros to Ringler’s daughter, according to her Austrian lawyer Gabriel Lansky.

But negotiations between the parties failed.

The civil suit will go to court on May 4. If Jagger loses, she will have to pay 19,000 euros, including court and lawyers’ fees.

In the US, finder’s fee usually refers to a commission agreed to be paid for introducing businesses and customers.

BBC article on Oetzi (the iceman)

If you are looking for an online source that aggregates blogs, law reports, legal magazines, journals and more, then you should check out Insite Law Magazine Netvibe (sponsored by Wildy & Sons).

Some miscellanea today. I did start twittering – see right-hand column – but have not really got into it. It will be useful for posting quick links, but without following and being followed by a large number of translators and/or lawyers, it will not be useful for terminology questions, for instance.

1. Weißwurst
Today (as already tweeted), IPKAT has an entry on the Weißwurst case. It has a photo of a cat – one of the old-style round-faced Siamese type – that has grabbed an uncooked British sausage. Something to shock Germans!

The writer, Marc Mimler, refers to the tradition that the Weißwurst should not hear the bells chime midday. He doesn’t mention the controversy as to whether it is OK to cut the sausage with a knife, or whether it is not better to suck out the contents. Enough said.

The case was also mentioned on the Class 46 Blog by Birgit Clark.

2. Large statue of Christ
As reported, the Fürth Stadtheimatpfleger has problems with the Neue Mitte, the huge shopping centre the town council want to splat across the town. Meanwhile, the Bezirksheimatpflegerin Andrea Kluxen has problems with a planned 55-metre statue of Christ to be erected near Wassertrüdingen near Ansbach. This is the same one that was planned for Bad Reichenhall last year. This recalls Franz Josef Strauss’s daughter Monika Hohlmeier, who is being exported to Franconia as a potential MEP. The Augsburger Allgemeine says:

The artist is Angerer der Ältere, who seems to do Tolkieny stuff. Pictures here.

3. Court interpreters in Los Angeles
The Los Angeles Times on American Justice in a Foreign Language an article about interpreters and how the courts found a telephone interpreter for a variety of Mixe spoken by only about 7,000 people in Mexico. 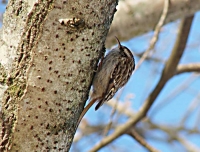 These tree creepers seem much less frightened than the nuthatches, which I have only got blurred pictures of. 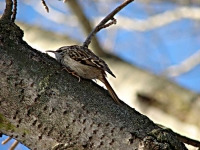 It would be easier to tell which one it is from its voice, apparently (Gartenbaumläufer: short-toed tree creeper, Waldbaumläufer: tree creeper – and both have equally long toes, of course).

LATER NOTE: I am told it is a short-toed tree-creeper, in view of the colouring on the sides.

The Irish Times reports that Prawo Jazdy is the Polish term for driving licence – it is not the name of the driver.

HE WAS one of Ireland’s most reckless drivers, a serial offender who crossed the country wantonly piling up dozens of speeding fines and parking tickets while somehow managing to elude the law.

So effective was his modus operandi of giving a different address each time he was caught that by June 2007 there were more than 50 separate entries under his name, Prawo Jazdy, in the Garda Pulse system. And still not a single conviction.

It sounds as if the Irish don’t have EU-style driving licences yet, but it isn’t absolutely clear:

In Poland, a booklet-type licence such as the one used in the Republic was phased out in 2004 and replaced with a pink, credit card-sized licence with an EU flag, the words Prawo Jazdy in the top right corner with (in admittedly smaller type) the holder’s name and personal details.

(Thanks to Susanne on the pt yahoo group)

Riccardo Schiaffino, who doesn’t speak German, comments on a visit to Vienna in Saving a few dimes while spending a ton.

At the Leopold Museum’s show on the Vienna art scene up to 1918 the English translation of a note on the origins of WW I said the Sarajevo assassination was due to the ultimatum issued from Austria to Serbia.

Since the ultimatum of course followed the assassination, either the German original was strangely wrong or the translator had a shaky knowledge of modern history.

This isn’t purely a Viennese problem. I recall the Germanisches Nationalmuseum in Nuremberg always had the most dreadful English in their exhibitions, on the level of ‘why bother with a translation at all?’ I haven’t been to an exhibition recently, though.