Isabella Massardo at Taccuino di traduzione has unearthed the Party of the First Part website and weblog, by Alan Freedman.
The sites are advertising a book of the same name that has not yet been published. Unfortunately, William Safire has given his approval.

What does it mean?
Witnesseth? Aforesaid? Quash that subpoena ab initio? Ask POFP for a translation of your favorite drivel and/or check out our A  Z glossary of legal terms already defined by our panel of distinguished experts.

In addition to the glossary, there is a competition for the Golden Gobbledygook Award for bad legalese and a Hall of Shame.

I think the earlier entries – a few a year from 2002 on – were originally syndicated in newspapers.

Time will tell how useful this blog is, but it certainly has a lot of useful legal English in it.

The Wall Street Journal Law Blog invited some lawyer-authors who went to law school to give advice to One Ls (several entries dated August 31).

Ron Liebman, Saira Rao, Jeffrey Toobin, Cameron Stracher, Jeremy Blachman, and Scott Turow. There is a description of their own writings for each of them.

In RA-Blog, Thomas Klotz prints his complete E-Mail to SizeGermany and their reply (German). 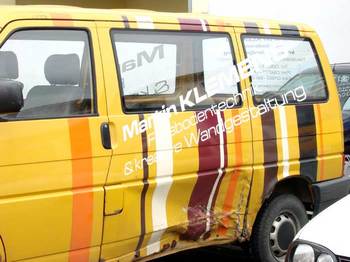 It’s a good thing I got into translating into English while it’s still necessary. 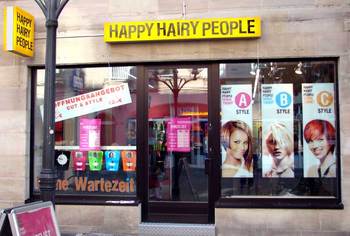 Practically the only German is Eröffnungsangebot and Keine Wartezeit. The items on the price list are cut & style, colour, multicolour, haircare. In the left-hand window are the pictures of four stylists, each with a clock marked next cut. 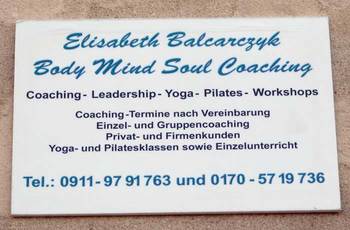 Word Play is a new translation weblog by Hagit in Israel. It looks promising (by which I mean it looks as if it is going to discuss things about translation that interest me!).

At Vorspeisenplatte, die Kaltmamsell is not one to run down British food, not only at Borough Market. But now she has encountered fried bread for the first time and gives a photograph – I think the bread in the photograph looks too oily and not brown enough. Most of the comments express horror. At least Hape says that bread done in oil in the oven was once eaten in Germany too.

The fried bread – dry toast is an alternative – is good for mopping up egg yolk or, especially, as a basis for fried or grilled tomatoes. Recovering from my first reaction of shame at ever having been involved in, indeed cooked, something so horrific, I ask myself why this is so different from a pile of pancakes and syrup in an American breakfast – I have a feeling they would get a better press.

SizeGermany is a project by the Hohensteiner Institut and Human Solutions GmbH to measure thousands of Germans and presumably improve clothes sizes. So I see from an ad by adidas factory outlet in the local rag. Pictures here.

You can apply to join in, but it says in the paper:

I would have thought they would have taken German passports, but how do they test deutschstämmig?

SECOND LATER NOTE: (Still quoting the (German) comment by a representive of the Hohensteiner Institut) Children must be at least six, but there is no upper age limit – however, you must be able to stand up and sit down during the measuring process.

On top of that, when you are being measured you will be asked what part of Germany your parents come from, because certain assumptions need to be tested: it is believed that people in North Germany are taller than those in the south, and that people in towns are taller than those in the country, which would be important information for clothing retailers.

(Incidentally, the results of the test will only be available to the companies that commissioned it).

The Apprentice, shown on the BBC, sees 16 contestants compete for a £100,000-a-year post with the self-made millionaire, Sir Alan, one of Britain’s best-known businessmen. Each week, one contestant is thrown out of the contest by the Amstrad founder, who leans across his boardroom table, points a finger and declares: “You’re fired!”

Mr Muir said: “Since The Apprentice came on TV, we’ve seen a massive rise in dismissals in which employers or bosses apparently emulate or copy Sir Alan Sugar’s methods. There is no doubt about it. It has resulted in a series of unfair dismissal applications to employment tribunals.”
Employment law requires certain procedures to be adhered to in dismissing an employee. An investigation in the first instance should be followed by a disciplinary hearing. If that hearing finds in favour of dismissal the employee should be given an opportunity to appeal.

Now that the Landesbank Baden-Württemberg is merging with the Sachsen Landesbank, the FTD has some language assistance. Article with glossary:

This turned out to mean that the German Federal Criminal Police Office (Bundeskriminalamt) had the file in Italian on June 29, a translation was ordered and it arrived on August 7.

It seems obvious that the journalists on RP Online have never translated anything for the German authorities.

At least they are shyly admitting that this was a Mafia killing. Previously it was always claimed there was no Mafia in Germany (funny that I had heard otherwise from Italian translators in Bavaria…)

ATICOM was on the case of RP Online promptly with a clarification by the President.