The Guardian today links to an article at the University of Toronto website about the myth that the Eskimo language (Inuktitut) has 200 words for snow.

Other researchers have noted that Whorf originally focused not on how many words for ‘snow’ there were, but instead on the fact that there was no single word equivalent to the broad meaning of English ‘snow.’

There are no specific words for fish, bear or people either, only for specific kinds of them. The Guardian adds:

the real gem here is the inclusion of the Labrador dialect word meaning ‘I thought I would never go to jail’: pannanaitsimavilialautsimaniagasugilautsimalaungilanga.

Via Carob (not a blog):
The International Trademark Association has a list of trademarks to help authors know when to capitalize things and how to punctuate them. This could be useful. I particularly like the possibility of getting generic terms.

I suppose it’s only the ones used in English. After all, for example, Tippex in German is always capitalized. Is it purely US, with no British examples? It says 170 countries belong.

I will probably not be blogging until the new year now. Unlike some, however, I do have a good chance of experiencing some snökaos, both German and English. 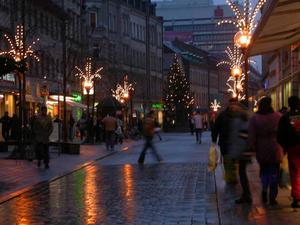 Stroock & Stroock & Lavan have a cartoon, called ‘Interviewing 101’. Click on the cartoon figure.

Powers Philips in Denver has such a witty site that it’s hard to believe it’s serious. It goes too far for my taste!

Powers Phillips, P.C., is a small law firm located in downtown Denver, Colorado within convenient walking distance of over fifty bars and a couple of doughnut shops. Powers Phillips also maintains a small satellite office-in-exile on the cow-covered hillsides near Carbondale, Colorado, where it puts out to pasture some of its aging attorneys.

Someone has inherited some houses and wants to sell them. From today’s Nürnberger Nachrichten: 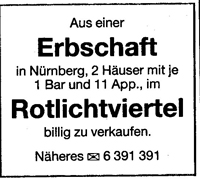 (From an inheritance in Nuremberg, 2 houses, each with 1 bar and 11 apartments, in the red light district, to be sold cheap. For details write to Chiffre 6 391 391)

IPKAT reports that three Thuringian sausages have been registered to protect their designation of origin. I presume others, such as the Nuremberg ones, are long since protected.

Liver sausage is OK – for spreading; Rotwurst might be blood sausage (Collins says black pudding, but there are German Rotwürste that come already cooked, and black pudding doesn’t); but the third is mystifying. Rost is the grid or grating you lay the sausages on to grill them. Collins has for Rostbratwurst ‘barbecue sausage’. Fair enough – those gratings are used at barbecues. This is a fairly pale sausage. I found a recipe online using pork shoulder and pork belly (I thought it was veal). But here is more information from the application to the EU:

Name: Thüringer Rostbratwurst
4.2. Description: At least 15 to 20 cm long, medium-fine grilled sausage in narrow natural casing(pig’s gut or sheep’s casing), raw or stewed, with highly spiced taste; …
Composition: coarsely trimmed pigmeat, pork cheek without rind, possibly also trimmed veal orbeef for the filling, not cured; the spice mixtures vary with the handed-down recipes and regionalcharacteristics; along with salt and pepper, caraway, marjoram and garlic are also used.
At least 51 % of the ingredients originate in Thuringia.
Geographical area: the Federal Land of Thuringia.
4.4. Proof of origin: Thuringian Rostbratwurst has a centuries-old tradition. The first documentary reference to it dates from 1404. The Rudolstadt State archives contain a bill from the Arnstadt Virgin Mary Cloister which includes the item darme czu bratwurstin (Bratwurst casings). Theoldest known recipe can be found in the Weimar State archives. It is from the Ordnung für das Fleischerhandwerk zu Weimar, Jena und Buttstädt of 2 July 1613. There is another recipe in theThüringisch-Erfurtische Kochbuch, dating from 1797. Today almost all Thuringian meat and sausage producers carry Thüringer Rostbratwurst in their range; it can be obtained anywhere in Thuringia at special hotdog stands. The provenance of the name has been retained, because at thetime of the former GDRit was used only as a genuine indication of geographical origin.4.5. Method of production: The meat is coarsely trimmed, derinded and ground medium-fine. Thespices are then added and everything is mixed to a cohesive mass which is filled into natural pig orsheep casings. The sausages are twisted off at a length of some 20 cm and then cooked at 75 °Cfor one minute per millimetre diameter. The sausage is sold fresh.4.6. Link: Thüringer Rostbratwurst is a product with a centuries-old tradition. It was appreciated by Martin Luther and Goethe and praised in literature as long ago as 1669 (in Grimmelshausen’sSimplizissimus). Owing to its unmistakable, excellent flavour Thüringer Rostbratwurst today enjoys a good reputation in Germany and beyond

I do wonder who introduced the term ‘hot dog stands’ in there.

In an earlier entry, I mentioned the term Effle. (EFL = English as a Foreign Language). The Effle page defines it as follows:

Effle is grammatical English which could never be uttered because it has little meaning and could never be put into a sensible context. There is lots of Effle in textbooks of English for foreign learners and in sets of exercises.

This topic was taken up by both desbladet and Mark Liberman at language log.

The language log defines Effle as ‘the pseudo-language of many phrase books’. I think this is right. I don’t think it is English for foreigners, but the kind of English you get if you translate literally textbook passages in books for learning other languages.

Anyway, I can’t pass up the opportunity of quoting from my favourite source, a book called ‘I am Learning Armenian’, ‘prepared by Krikor Afarian (Teacher and Journalist), second edition 1978, Shirak Press, Beirut.

I am not and never have been learning Armenian (I think my Armenian friend Jeanette Haritounian – where are you now, Jeanette? – was interested when I first got it. The alphabet is offputting (invented by the immortal St. Mesrob at the beginning of the 5th century A.D.).

The lessons start off with mere lists of words, later with a sentence or two added, and eventually consisting of a number of sentences, not a coherent text. I quote from Lesson 21, Revision:

Yezneeg likes very much the meat of the hen.
Ara combs his hair.
The hedgehog is a little beast.
Aimma feeds her young ass.
The silk-worm is very useful.
The nasty mouse ate the cheese.

The word lists seem random: Lesson 22: ‘field-glass, mask, drawer, money, man, he or she put, vegetable-marrow, pr. noun of boy’ and then ‘Hrant ate that vegetable-marrow’

Some more sentences at random:

Here are some facts about Armenian from UCLA.

Some German law blogs have noted that there has been an Anklageschrift against Michael Jackson. I’m not sure that’s right.

In the case of a misdemeanor (similar to German Vergehen), a prosecutor files an accusatory pleading in court. The pleading is called a criminal complaint, an information, or a petition. (An information is a Strafanzeige, I would say).

In the case of a felony (as in Jackson’s case; similar to German Verbrechen), the above accusatory pleading is one possibility. And that’s what has happened here: the pleading is called a criminal complaint and is signed by the district attorney.

Alternatively, there may be an indictment handed down by a grand jury (this would be Anklageschrift for me).

About half the states, mainly in the east, require prosecutors to use a grand jury. Other states allow the prosecutor to choose the procedure.

Dietl calls criminal complaint Strafantrag (which is confusing, because a German Strafantrag or application for prosecution is made by a person who is the victim of an offence that can be prosecuted only on the victim’s application). Romain has Strafanzeige.

There have been a number of articles in the press and online about how to try Saddam. Handakte WebLAWg points to an article by Robert Leicht in Die Zeit today, with the heading

bq. Now the International Criminal Court would be useful. But because the USA doesn’t want it, it now has the problem: How is Saddam Hussein to be convicted – by victors’ justice, by his successors, by his victims?

Of course, the ICC has the principle of complementarity, which means that it acts only if the country or countries that otherwise have jurisdiction refuse or are incapable. At least the USA has jurisdiction and would surely not pass up on this case. I suspect Iraq may have jurisdiction too, but it might be considered incapable, because its court system is still in disarray.

Another problem is that the ICC can deal only with crimes committed after July 2002. I suppose most of Saddam’s offences were before that date.

(See earlier entries on the ICC, from October 19th-October 24th).

The Independent reports that the inquests into the deaths of Princess Diana and Dodi El-Fayed are to take place next month. Michael Burgess, Coroner of the Queen’s Household and for Surrey, will be conducting separate inquests.

No point in rushing these things.

A coroner, in England and Wales, is a qualified lawyer or doctor who holds an inquiry into accidental or unusual deaths and used to be responsible for treasure trove too (see earlier entry). The coroner has a small jury, whose verdict will be something like ‘accidental death’. Matters may be passed on to the Crown Prosecution Service if they look suspicious, however. There is some interest in whether anything new will be revealed.