An article by Katharina Granzin in taz about literary translators and how reviews of books usually omit to mention them.

Burkhard Müller recently gave a talk (symposium at Literaturhaus in Munich) after analysing the book pages of newspapers. Over half of the reviews of translated books totally omitted reference to the translation. The translator Frank Heibert reported that a large German weekly paper devoted a whole page to a review of a book he had translated and particularly praised the language, but did not mention that the book was a translation.

However, at this symposium there was also criticism of the lack of understanding of language and of translation of reviewers. Joachim Kalke said he did not mind not being mentioned, since current literary criticism has descended to such a level that it is better not to be subjected to it.

On the whole, however, Granzin concludes that no great work of foreign literature seems to have been ruined by a bad translation and it is perhaps not necessary to mention the translation in every review. An exception has been made for new German translations of Dostojevsky (Swetlana Geier) and Chekhov (Peter Urban), and for translations where the original presented particular problems.

She concludes that literary translators might make do with the charwoman’s slogan: ‘As long as nobody complains, everything is OK’:

Amanda Galsworthy has been the French-English interpreter for three French presidents. I listened to the BBC podcast recently, but it is no longer available as such.

Her diplomat father was an extreme europhile who brought up his four children in four different languages and wanted her to be an interpreter, which eventually she became. He was impressed by simultaneous interpreters, as is the interviewer. She is apparently bilingual: she does quick mental calculations in French.

I mentioned the Thatcher anecdote before.

There is also a Gerhard Schröder anecdote. There is some discussion of how interpreters at official meals get to eat. She sits beside Sarkozy. She stood behind Chirac. Chirac would sometimes butter bread and hand it back to her. When Gerhard Schröder saw this, he decided to follow suit, and he passed a bowl of soup back to his interpreter, who found it more of a hindrance than a help.

Podcast no longer available from 30 July, but programme can still be listened to here. 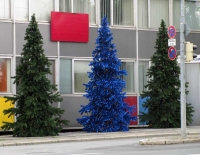 This morning. I suppose shops have to plan ahead. 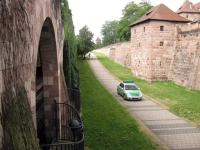 This is a photo of part of Nuremberg city wall, for those who don’t know it.

It’s close to the Germanisches Nationalmuseum. They had an exhibition on castles (there’s a parallel one in Berlin) so I went and had a look.

Scarcely had I entered the first room when I was overcome by a sense of information overload. I don’t like these audio guides, as they are so long-winded. Looking at the explanatory texts by the exhibits was also difficult with bifocals. I looked at a couple of castle models and some Playmobil knights’ castles, but I wasn’t in the mood for it.

This Püsterich appealed to me. I sneakily photographed it in the guide (photography not allowed in exhibitions). It is made of ceramics or metal, is filled with water and put in the fireplace, and when it is heated it starts blowing out steam through its mouth. No-one knows why. It may have been to increase the flames, but water is not usually good for that. This is the most famous one and is probably from the 13th century. 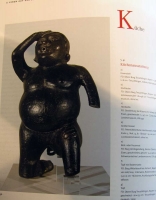 In fact it is on the Web too. It is usually at Sondershausen Museum. Google image search reveals a couple of other Püsteriches too. And Sondershausen has a mining museum and an underground marathon (Untertage-Marathon). You have to wear a helmet.

To make up for the lack of posting, here are some miscellaneous links of things I’ve noticed on the Internet.

1. Suppenfuß, from Feetart by Stoecker Fotografie – many more photos on site.

This one recalls Suppengrün (soup vegetables) and also pigs’ trotters, which I think are a similar price per kilo.

2. This has been widely linked – Tracy Goodwin is an American coach who teaches people to speak with what she believes is a British accent (she refers to the ‘British dialect’). One link is on The English Blog. Jeffrey Hill says:

Tracy may be an expert in some things but definitely not in speaking with a British accent. Hers is all over the place—sort of a cross between Dick Van Dyke’s Cockney chimney sweep in Mary Poppins and the Queen.

On YouTube you can see How to Speak with an American Accent. A Parody of the Tracy Goodwin videoby ELIPTIS (note picture on wall in the two videos). Heavy emphasis on the fact that this is not meant seriously did not get through to all the commenters.

That is so far from ANY American accent I have ever heard in any state. The U.S. spans an entire continent from east to west. There are numerous ways of pronouncing words in the U.S. I am American and often I could not understand what﻿ you were saying either when you were speaking with a British accent or ATTEMPTING to sound like an American. Perhaps you would find it good to practice a lot more before you make your next video about American English.

Its a Parody you fool. Parody = ” A literary or artistic work that imitates the characteristic style of an author or a work for comic effect or ridicule.” I was taking off, which means copying Tracy Goodwins﻿ video of an English Accent….

3. BBC News reports that Tokyo’s oldest man had been dead in bed for thirty years.

Mr Kato’s relatives told police that he had “confined himself in his room more than 30 years ago and became a living Buddha,” according to a report by Jiji Press.

But the family had received 9.5 million yen ($109,000) in widower’s pension payments via Mr Kato’s bank account since his wife died six years ago, and some of the money had recently been withdrawn.

4. Tips for Translators has a short list of free online periodicals for translators.

5. In the latest edition of Translation Journal, among other interesting entries, there is an article by Michael Wilkinson on using the Web as corpus. The main emphasis is on how to use Bill Fletcher’s Web as Corpus website if you (like me) have not got round to creating your own corpus. I found the site promising when I tried it out for legal English.

Apparently really thin and elegant women in the USA and perhaps UK too have now made the Bad Wörishofer sandals a fashion item. They follow Birkenstocks.

The name comes from the spa town Bad Wörishofen. As far as I can tell, the special feature is the insole (Fußbett).

I first read about this trend in The Independent yesterday. It claimed that the shoes could cure bunions. I would wear them immediately if I thought that. Can a shoe cure a bunion?

The clip-clop of new footwear trends usually heard marching on the high street as the autumn season approaches is being drowned out by the sturdy shuffle of a shoe designed not to turn heads but to cure bunions.

Here or elsewhere, I am sure I spotted the wandering umlaut problem (Worishöfer), but it will have been corrected on the internet.

The Daily Mail had an article yesterday (with photos).

Named after the Bavarian spa town where it is made (Bad Wörishofen), the cork-soled saviour to the aching feet of ladies of a certain age is enjoying an unlikely surge in popularity.

Celebrities such as Maggie Gyllenhaal and Kirsten Dunst have been spotted wearing Wörishofers – which come in several designs and colours but never sway from their comfort-comes-first approach.

The Guardian took it up today. 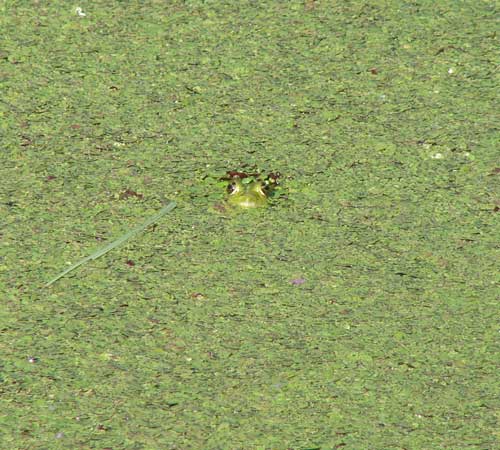 It’s been widely reported, even in English-language papers, that a vault containing Franz Kafka’s papers was opened in Zurich yesterday, I believe in the presence of several people including one Germanist.

Just why it has taken so long for the hidden manuscripts to see the light of day is a story of Kafkaesque proportions in itself. Born in Prague in 1883, Franz Kafka – whose surname means “magpie” in Czech – was a little-known Jewish writer with a handful of published German stories to his name when he died.

I don’t know why we need to be told that Kafka means magpie in Czech – especially since it doesn’t, it means jackdaw. Not that I know any Czech, but Google thinks magpie might be straka.

LATER NOTE (August 2010): here is a photo of a jackdaw on Fürther Freiheit: 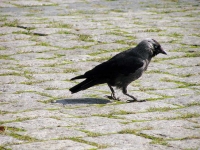 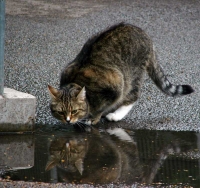 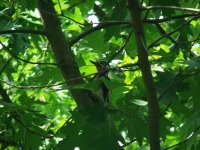 The Independent reports today that enough fat is being removed from the sewers under Leicester Square to fill nine double-decker buses:

Enough fat to fill nine double-decker buses is being removed from sewers under London’s Leicester Square.

A team of “flushers” equipped with full breathing apparatus has been drafted in with shovels to dig out an estimated 1,000 tonnes of putrid fat.

I wonder what the temperature is like down there.

I reminded me of the recent article in the Guardian with the title Wales, Belgium and other units of measurement.

It started with the bit of iceberg ‘the size of Luxembourg’ that had broken off near Iceland (the same description was used in German).

A Guardian letter writer, commenting on the same story, endorsed the argument: “I would have had some difficulty even if the chunk had been described in terms of the size of Wales. Could you tell us how big it was in football pitches or Olympic swimming pools?”

As Nancy Banks-Smith has noted: “Any plague spot of indeterminate location is always compared to Wales. Wales is not quite sure how to take this.”

The article refers to double-decker buses as DDBs.

There’s more about Wales and Belgium at h2g2, including what the USA and Canada say instead.

Wikipedia also has an entry on unusual measurements. I didn ‘t realize that shake and jiffy are defined in astrophysics and computing, nor had I encountered the microfortnight:

One very convenient unit derived from the FFF system of units is the microfortnight, one millionth of the fundamental timeunit of FFF, which equals 1.2096 seconds. This is a fairly representative example of “hacker humor”, and is occasionally used in operating systems; for example, VMS’ TIMEPROMPTWAIT parameter is measured in microfortnights.

In German I have found Bayern, Österreich, and Luxemburg again.