In recent months at least, it seems that machine translation, based on huge databases of sample translations (neural networks), has massively improved. DeepL is one example. Professional translators would avoid using this as their translations might be integrated into the system, which would be a breach of their client confidentiality. But I do suspect that any law firm processing a huge pile of exhibits in a foreign language and wondering which pages would be worth translating can have the whole lot rapidly machine-translated, then zoom in on the most relevant bits and have them machine-translated.

Peter Winslow, a legal translator with a penchant for Karl Kraus, has posted in a Beck Verlag forum three translations of a sentence, two of which are machine translators and the third by a human translator with to me dubious qualifications:

Presumably most readers of this quiz will be German lawyers, and of course they will ask themselves how to know whether a translator can be relied on. It isn’t easy. Someone who has studied translation at a German university will probably have learnt little about legal translation, although you may need to show legal knowledge to be qualified to translate for the courts. It would be better to find a translator with specific legal experience or qualifications, and experience in doing legal translations. But I think one problem is that lawyers specialize, whereas legal translators tend to specialize only in law, not in a narrow area of law. They may have years of experience in a particular area of legal translation, or they may not. I hope most big law firms that do a lot of international work will have inhouse translation teams including trained translators, who will know how to evaluate any software systems used for translation. With smaller firms it is less likely.

The sentence taken as an example is “This policy defines the specific server roles required to implement the server program.” This sentence is hardly typical of legal translations.

(I am guessing, like Prof. Dr. Müller, that the second version is the native speaker of German – the answer has not yet been revealed).

One problem at the moment seems to be that agencies are using MT and the occasional sentence is quite wrong. They then require “proof-reading” from a freelance, but if only the final product is reviewed, in English for example, the error may not be evident, although the review will be cheaper than if it were compared with the original.

Aldi really has a lot of very British things in its selection, but I had not seen this cheesecake. This is the ultimate British product!

I remember this cheese cake as a regular item at the bakery in the 50s and 60s. It is sometimes called ‘London cheese cake’ to distinguish it from cheesecake that contains cheese. This one, as I remember it, was round and consisted of layers of flaky pastry topped with (usually dry) icing and coconut ‘shreds’. In between pastry and icing there was a blob of sponge cake. The strings of coconut must have been from a paste that was extruded in some way.

The Aldi version is rectangular and has luscious fondant icing and jam under it. 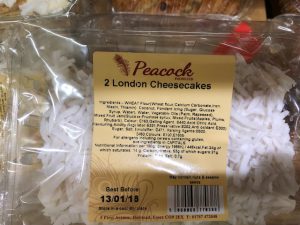 Following this, I decided to try the Greggs’ one, and on the way to Greggs I passed Kingcotts bakery, where they had their own.

The Kingcotts one was as I remember them, round, dryish but relieved by a plug of sponge cake i the middle. 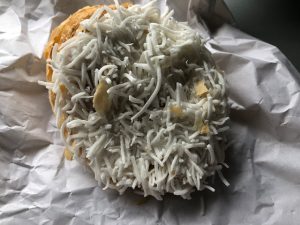 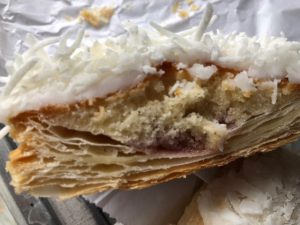 The Greggs one was squarish and had jam but no cake. It was rather thin and meagre. 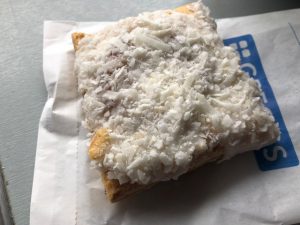 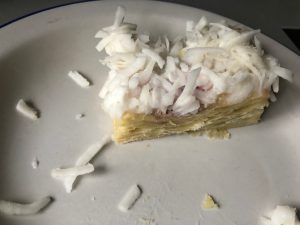 The coconut shred/strips on top vary. The Greggs ones do look like desiccated coconut, very dry.

Kingcotts are the makers of the famous ‘real’ bread: 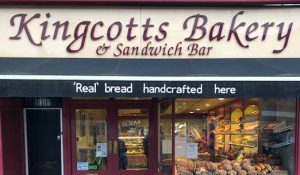 It is actually real bread. I recommend the cloudy white sandwich tin (sourdough).

Recommendations: the Kingcotts is the genuine cheesecake (£1), but only if you are in Upminster. You may have to try a local baker. The Aldi is delicious (I have forgotten the price) but not authentic: the puff pastry is slightly moist (in the direction of baklava) and the fondant icing with coconut dominates. I am sorry the Greggs is not quite right (80p). I must next find out why Godfreys in Hornchurch say theiir Tottenham cake is not the real thing, and whether Greggs is: I believe the pink colour has to come from a particular mulberry tree in Tottenham.

This book should be interesting. It comes to the conclusion that particularly after Brexit, it would be a good idea for English to be the original language of all legislation.

Arriving back in London after a few days in Stuttgart – what a welcome! 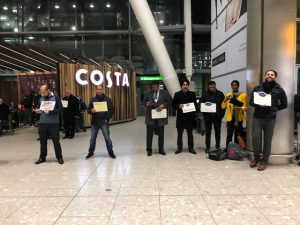 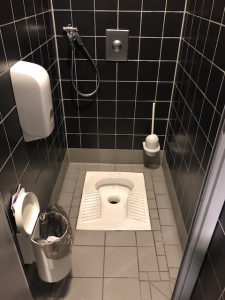