This is odd. Last year was surely the 500th anniversity of Albrecht Dürer’s painting of the hare (the most famous painting to come out of Nürnberg – send it as an e-card from here). Now it is apparently the 500th anniversary of Das große Rasenstück. This shows a lump of grass with plantains and dandelions and is variously translated as The big turf, The great piece of turf, The large turf, The tall grass (How about The big sod?) Here is the real thing, and here is a version amended by Klaus Staeck.

So now we are to get 7,000 hares on the Hauptmarkt in Nuremberg, the work of Ottmar Hörl. These commemorate the Turf and are called Das große Hasenstück.

The installation is being put up this week and will be opened on Saturday. It can be seen till 17th August. 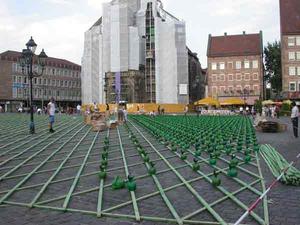 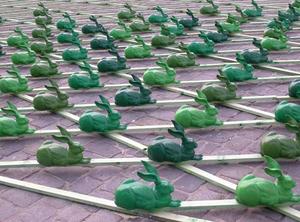 A press release dated 30 July says that at this year’s Frankfurt Book Fair will have a stand for translators – not just literary, apparently, but it sounds as if the general idea is published translators. Translators can be accredited, which seems to mean given the seal of approval
Pressemitteilung deutsch
Press release in English
Thanks to Andrea Doerges.

Dawid Wiskott usually translates into Hebrew and German. One day someone needed a translation of a two-page contract from Aramaic into English. It turned out to be a Hebrew witch’s spell.

NOTE ADDED LATER: (these instructions are from Dawid, not me, and possibly apply only to Netscape): if you look at Dawid’s page (some of this and all the rest of the site are in Hebrew), select View-encoding-hebrew (Windows). Netscape will accept only U.S. ascii as default. You can choose between good Hebrew and mucked-up English or vice versa (left-to-right / right-to-left problem).

This might interest technical translators. From Boing Boing, Darren Barefoot has a Hall of Technical Documentation Weirdness (but surely the meaning of the Chinese one is obvious? The shoes are made of leather, cloth and rhomboids).

Via How Appealing, The Smoking Gun presents the Legal Document of the Year for 2003 (they couldn’t wait till December):

bq. The winner is not for the faint of heart, because in it the Colorado State Public Defender’s office provides what possibly may be the most comprehensive history of the “F-word” one could ever hope to find.

I particularly enjoyed the table contrasting the frequency of two forms of the F-word with that of other common expressions such as Mom, apple pie, freedom of speech, baseball, hot dogs and Chevrolet (well, in Britain we do sometimes talk about apple pie).

I have used the Smoking Gun archive before. It has rather extreme cases, as scans, showing the original layout, signatures and certificates of service.

Howard Bashman’s How Appealing blog has a monthly interview (twenty questions) with an appellate judge, as Denise Howell reminded us yesterday.

According to an article from BBC News, losing email is worse than divorce:

bq. A week without e-mail is more traumatic than moving house or getting divorced, say techies.
The findings come in a survey of information technology managers for the software storage firm Veritas which looked at how businesses have become dependent on e-mail.

You can become a ‘zertifizierter Übersetzer’ (certified translator, literally – although in BE that sounds as if you were ready to go to a lunatic asylum) – see the item on E-Bay.

The firm appears to have been on ebay for a while. It claims to certify knowledge you already have. It says you train and do a final exam and then you get a certificate. The title can legally be used in Germany. The company was founded in the UK, but of course EU law permits that, no matter whether the object was to save money. But maybe the company does have a lot of English-language operations and I just haven’t found them.

On a cursory search I failed to find an English version.

Thanks to Robin Stocks, translator, who is in Bonn and also does a home page for the Bonner Übersetzer- und Dolmetscherforum (German, database of translators and interpreters), and Christiane Sprinz, food technologist and translator.

On the firm’s personal page at E-Bay (registration probably necessary), it says you don’t need to do any training if you confirm by email that you have the necessary experience.

Via Isabella Massardo, an article from the Sydney Morning Herald about the way Australian English resists U.S. influence, No fries with that, mate.

There’s a link to ABC Online’s Australian Word Map, which shows regional Australian expressions and indicates their spread on a map, with ten words of the month.

bq. A recent inclusion is “blue-tongue”, for small children (because toddlers are close to the ground, like blue-tongue lizards). That one comes from Tasmania. The Brisbane region contributes “desert chicken”, meaning corned beef. From the central coast of Queensland comes “muckadilla”, meaning a disorganised person. From the Sydney region comes the expression “YMCA dinner”, or leftovers (“Yesterday’s Muck Cooked Again”). And, when someone agrees to take part in an activity, they say they’re “thumbs in”.

Old Bush Vernacular will be used in The Aussie Bible, to be published in August (there is already a Cockney Bible).

This is about machine translation. An article with this title at the University of Southern California describes a relatively successful machine translation system devised by their Dr. Franz Josef Och (who did a lot of preliminary work at the Rheinisch-Westphälische Technische Hochschule, RWTH, in Aachen, based on late 1980s IBM research).

The idea is to stuff a machine with masses of parallel texts and let the machine work out the translation using statistical comparisons.

Och’s system scored highest of 23 Arabic- and Chinese-to-English systems. It was also entered in a recent competition to devise from scratch an MT system for Hindi as fast as possible. The results are not out yet.

Creation of the parallel texts needed for Och’s system to work was complicated by the fact that Hindi is written in a non-Latin script, which has numerous different digital encodings instead of one or two standard ones.

You’re not kidding! And I wonder what the quality of the input translations was.

I also think of translation memory problems where segments in one language don’t always match those in the other in different texts.

This method ignores, or rather rolls over, explicit grammatical rules and even traditional dictionary lists of vocabulary in favor of letting the computer itself find matchup patterns between a given Chinese or Arabic (or any other language) texts and English translations.

Such abilities have grown, as computers have improved, by enabling them to move from using individual words as the basic unit to using groups of words — phrases.

Different human translators’ versions of the same text will often vary considerably. Another key improvement has been the use of multiple English human translations to allow the computer to more freely and widely check its rendering by a scoring system.

And I wonder how many versions they had for Hindi, Chinese and Arabic.

bq. The Harvard Law School Library has approximately one million pages of documents relating to the trial of military and political leaders of Nazi Germany before the International Military Tribunal (IMT) and to the twelve trials of other accused war criminals before the United States Nuremberg Military Tribunals (NMT). …

bq. In this project only the English language trial documents and trial transcripts will be presented, but the evidence file documents are usually in both English and German.

German documents are online at the Oberlandesgericht Nürnberg.

Virtual tour of the Nazi party rally grounds in English or in German. A museum, the Dokumentationszentrum opened there in 2002.