Apparently it has been argued that the German word Rechtsprechung should not be translated as case law, because the term case law implies the whole common-law system of judicial precedent, and German law has nothing like that. (This is an imprecise quotation: the suggestion was said to be that it is inappropriate to refer to court decisions of countries like Germany and Austria, which emphasize codification, as case law).

I disagree with this: there are differences between the importance of cases in German and English law, but the term case law can still apply to both. And it is applied to both, for instance by Markesinis, by Raymond Youngs, by other writers on German law. A search on German case law in Google Books will produce many examples, some of them good. Markesinis uses precedent too. That is probably a clearer term for non-English speakers, but it certainly does not suggest that cases are not law in Germany.

Anyway, the upshot is that for me, German Rechtsprechung and English case law are close enough to allow the translation. The translation of legal terminology often hinges on how close the translator finds two legal institutions. (I don’t translate Rechtsanwalt as solicitor, unlike many, because I think it’s too narrow – I prefer attorney, even though the term may be seen as historical or American).

Incidentally, German case law was relied on by judges when the Civil Code was first introduced: it was not a blank slate or Stunde Null as far as civil law was concerned. Cases are used to fill gaps in codes and statutes, and in some cases this happens by the legislature’s design. Commentaries on codes and statutes are full of references to cases. Of course, a court is not obliged to be bound, but it often will follow cases. The Federal Constitutional Court binds itself too.

The source of the opinion, which some other legal translators agree with, was a seminar by Russell Miller preceding the current ATA conference in Denver. Here is the summary:

The law is an inherent part of legal translation. With this truism in mind, this seminar aims to introduce German-language translators who work with legal translations to some of the traditions vying for influence in German law and legal culture, particularly the civil law tradition and the constitutional law tradition. It is hoped that a better grasp of the spirit and substance of German law will improve and enrich the work of translators dealing with German legal materials.

I wish I could have been there – it must have been interesting. Has anyone got some materials? Russell Miller is well qualified in German and US law, but one can still disagree on terminology.

Here is a quotation from a book on Google Books by Martin Vranken, admittedly a Belgian, who teaches at Melbourne University, which illustrates a use of case law which I find perfectly acceptable and which is common:

…the dogmatics of the BGB has not prevented the German law of tort being shaped heavily by case law. …the courts use Para 823, I BGB as the legal basis for important developments in tort law.

Incidentally, one of the suggestions for an alternative given on the mailing list was jurisprudence. It’s in the title of ‘The Constitutional Jurisprudence of the Federal Republic of Germany’ by Donald P. Kommers. And I’ve now seen it used in the German Law Journal. There’s an article there by Antonio K. Esposito and Christoph J.M. Safferling entitled Report – Recent Case Law (sic) of the Bundesgerichtshof (Federal Court of Justice) in Strafsachen (Criminal Law). The first sentence is:

Reporting on one year of the Bundesgerichtshof’s (BGH – Federal Court of Justice)
jurisprudence in criminal affairs is always a delicate matter.

I find this use of jurisprudence really weird. To me it means legal scholarship – Rechtswissenschaft. It seems it may have come via Lousiana.

Alternatives to case law, for those who object, are: court decisions, judicial decisions. Adjudication was also suggested.

I’ve mentioned weblogs on legal English before, I think, and I’ve certainly mentioned Jeremy Day’s blog on English for Specific Purposes, Specific English. But I haven’t yet put them on my blogroll, although I think they must be highly relevant here.

Here is a link to the legal English entries on Jeremy’s blog. The latest one, My first and worst legal English lesson, is a great description of what can go wrong when you present yourself as more expert than you are – certainly a risk not only for non-lawyers teaching legal English, but for lawyers too. If you’re helping lawyers to improve their English, you don’t have to be the source of legal knowledge, but the facilitator.

The entry earlier than that, Legal English blogs, is a whole year old and gives links to other blogs on legal English (including Transblawg!).

And here’s another one: English for Law, by CKL, with many suggestions for teaching materials sources.

Excellent Practicle Guide, 18 Dec 2009
By …
This review is from: The Pocket Book of Proofreading: A Guide to Freelance Proofreading and Copy-editing (Paperback)
I am studying proofreading and copy-editing via a correspondence course, which is fine, but I was searching for additional help and practicle exercises without having to pay a fortune. I found it in this neat, concise and easy to read book. The writers style is very positive and even some of the more complex areas are handled with ease. The exercises included are worth the price alone. If you are thinking about becoming a proofreader,already studying through a course and/or just want some information about the whole subject look no further. I looked at many alternatives and eventually chose this after reading the reviews. I hope you do the same. If like me you live outside of the UK try Amazon.fr for this book, in the English books section, it’s cheaper because the price is already in euros.

(amazon.co.uk customer review of The Pocket Book of Proofreading)

Cheaper because the price is already in euros? 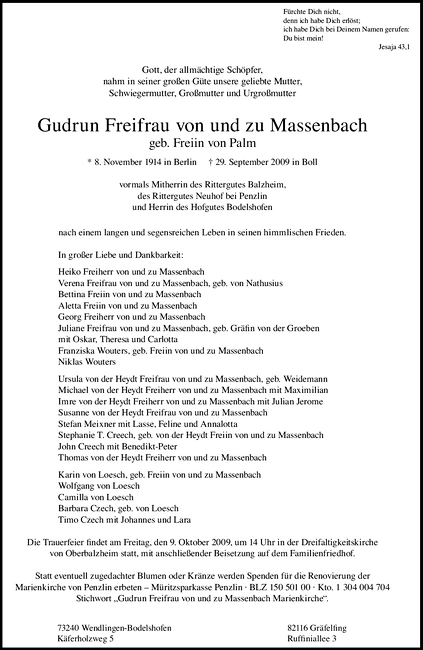 No doubt all readers saw the video of Mary Bale stroking a cat and then dumping it in a wheelie bin, whence it was reclaimed 15 hours later. Just in case not, here’s a short video with English soundtrack and German subtitles (from the Swiss 20 Minuten news programme).

A woman who was caught on CCTV dumping a cat in a wheelie bin was fined £250 today after pleading guilty to causing unnecessary suffering to the animal. …

She was also banned from keeping or owning animals for the next five years.

District judge Caroline Goulborn told Bale the potential of the offence to have caused harm to the cat was substantial, but in reality it had not been hurt.

In England and Wales, prosecutions are made not only by the Crown Prosecution Service, but by other bodies and even individuals. If the CPS had prosecuted, the costs would have been about £1,100 less. This prosecution was by the RSPCA, and according to the Magistrate’s blog, Cash in the Kitty, the RSPCA just claimed all the costs it could think of. 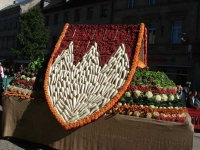 The harvest festival procession at the Kirchweih was last Sunday, so this is a late report. This photo shows the integration of immigrants, with the oxcart followed by the Turkish group with a portrait of Atatürk. 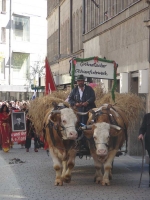 Here is Barbara Ohm, who has been the principal local historian and guide for years: 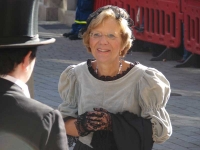 Here’s another local dignitary (or two): 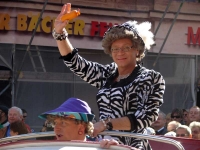 And this is what it looks like today, after the Kirchweih (the weather was very good this year). Not many town centres are given over to a funfair to this extent): 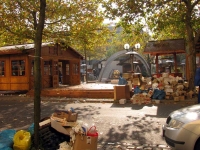 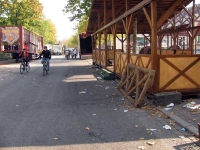 Bierbikes hadn’t really registered with me until the city of Düsseldorf banned them recently and the order was confirmed by the Düsseldorf administrative court on October 6.

The judgment only affects Düsseldorf, and it is not yet final and non-appealable (rechtskräftig) there, so they can still be used. The idea is that one allegedly sober man steers the vehicle while up to sixteen sit along the sides, peddling – make that pedalling – and imbibing.

Here is a picture of one I took at the harvest festival procession yesterday (the following group represent the church of St. Michael): 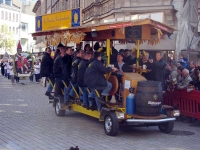 The Guardian reported on the matter very promptly:

The bizarre contraptions hail from the Netherlands but are a particular hit in Germany, where they are offered to tourists in 34 different cities. Beer bikes, also known as “pedal pubs” or “mobile conference tables”, allow up to 16 drinkers to sit around a beer-barrel table, help themselves to on-tap beer, and listen to music while pedalling around the city. They are steered by a non-drinker employed by the operator. More than half of those who rent them are on stag parties.

The court in Düsseldorf issued the ban this morningafter complaints from other drivers about rowdiness. Complainants maintain that the bikes caused traffic jams, which intensified the longer a beer bike journey lasted – in effect, the more the revellers drank – and the more their pedal power tended to be reduced.

I wrote about the types of German birth certificate in 2005.

The practice of German register offices changed on January 1 2009.

Here is my earlier summary with the changes:

This shows that you can usually translate both Geburtsurkunde and Abstammungsurkunde as birth certificate, but there will be circumstances in which you need to distinguish them and can add ‘showing natural parents’.

Another problem I mentioned then was that some Geburtsurkunden say ‘mit der Abstammungsurkunde identisch’. This means that if you want to get married, you can use the certificate as evidence of your biological parents.

There are more changes to the system. There is no longer a Familienbuch, but an Eheregister. I haven’t read these up in detail, but here is some information from Braunschweig. 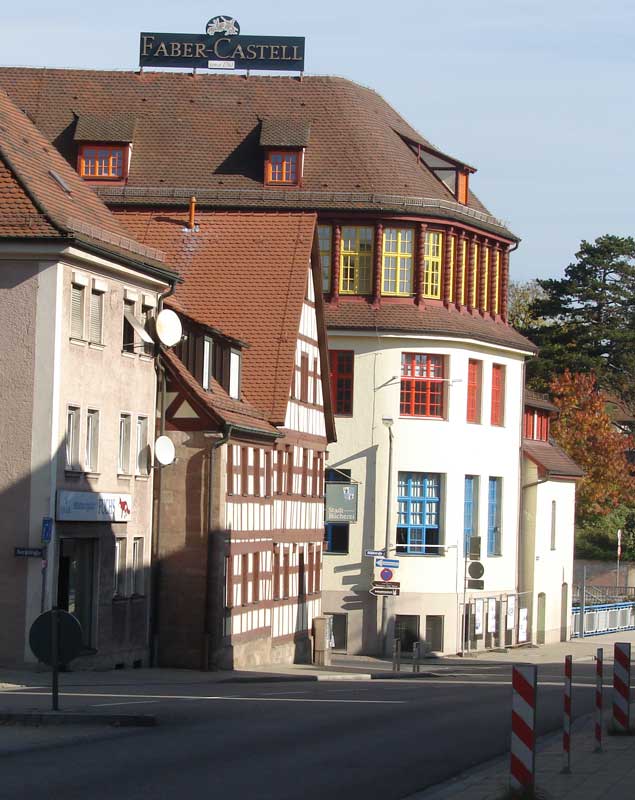 This is a view of the Faber Castell pencil factory, or part of it, at Stein. I go through Stein most Fridays so this time I got out to take a picture.

The occasion for the picture is an article in the Economist in September, Faber-Castell:
The future of the pencil – An eight-generation family firm shows how innovation need never stop.

Apparently it was Faber Castell that invented the hexagonal pencil, which won’t roll off the table, and various other things.

I got this from IPKAT, where Neil Wilkof is disturbed by the Economist’s claim that Faber Castell stole the idea of putting a rubber (that’s an eraser, for US readers) on a pencil (someone else had patented the idea, but the judge thought it was obvious).

What did The Economist mean by “stolen”? I mean, in today’s world, the bad guys, at least under one view of things, are the patent trolls, who are accused of seeking to enforce a patent solely for the purposed of extracting “unfair” rents from unsuspecting users of the patented invention. No one would go so far as to say that patent trolls are “stealing” from the third parties who agree to pay the troll a sum to settle. Be that as it may, the pejorative context of the patent troll is exactly the opposite from the Faber situation in the 1870’s. All that Faber apparently did was defend itself from an infringement claim by alleging that the patent was invalid. If that is theft, then virtually every defendant in a patent litigation action is candidate to be of a “thief”, if it succeeds in invalidating the patent at issue.

Meanwhile, for those who read German, have a look at Lexikaliker’s blog, mainly about pencils. Even if you don’t speak German, the photos are interesting. 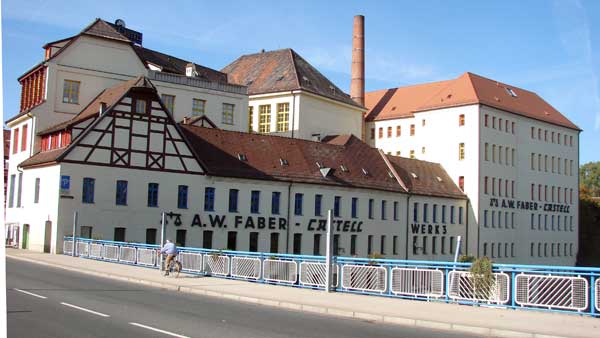 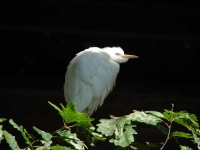 This is a bit of a cheat as I see it in Nuremberg Zoo, in an en closure that the public can go into, with ibis, black stork and spoonbill.

But they are beginning to breed in England, along with little egrets. I just wanted to link to this brilliant headline: Egrets? We’ve had a few, in the Independent (the yellowish-brown colouring is in the breeding season, apparently).