Interesting interview (in German) with Katy Derbyshire on translating Clemens Meyer Im Stein (Bricks and Mortar) Ich würde mir wünschen, dass die Literatur die Welt verbessern kann. The novel is actually on my bookshelves but I haven’t started it yet. It’s about the development of prostitution in an East German town after reunification.

The author and translator are apparently giving a talk at Senate House on May 11, from which I discover that there is a

The GLGN is part of the think german initiative of regional networks spearheaded by the German Embassy.
The aim of the network is to fight the corner for all things German in the Greater London area by bringing together all those people in and around London who have an interest in the German language and related cultures and facilitating both real and virtual communication between them.

The Institute of Modern Languages Research is now in Senate House, as I realized recently when reading a history of German studies in London called Glanz und Abglanz.

Now when days get longer and the sun comes out again it’s time for the German Village Festival. Sit outside in our Garden and get the vipe together with friends or family and enjoy a bratwurst or maybe one of our 3 different special brewed Bavarian beers. In addition you can visit our FunTime area or get your self a Heidi wig in the special German souvenier house. In the evening you should join our party in the Bavarian FestTent – grap your Lederhosen or Dirndl and become part of the biggest party!

Some of our teachers of German in London were Jewish emigrés (I suppose that’s what we called immigrants then). For instance, I first learnt German at school from a Fräulein (Ruth) Hoeniger, who must have had a stroke a couple of years after I started and so I did not know her for long. I wasn’t even sure she was Jewish, but research indicated she was, and was born in Berlin and taught at schools in Leipzig in the 1930s. I wondered if she was related to the Johann Hoeniger who designed one of the Berlin synagogues, but was unable to confirm that. At university, one of our teachers was Dr. Ilse Graham. I did not know that her husband was a cardiologist at Great Ormond Street hospital, but here is an obituary of him in The Guardian. There are also memoirs online, Scattered Leaves, with photos, typed up by his son at dictation (I got that from a comment on The Times obituary). He was 98 when he died this year.

Having initially as a child wanted to study dentistry, at the age of about 10 I decided that this would be too limiting. I thought I should study medicine. At the age of about 16, when I first went to England, my parents gave me a book by an Ernst Scharrer, called The Brain. I had carried this with me for years and, much later in my story, when studying at Western Reserve, I had a Professor of Anatomy, by the name of Hoerr – and then a new person joined the staff, by the name of Scharrer! The penny dropped that this must be the same person who wrote my precious book. After his first lecture – he was an outstanding teacher, who would draw his complex diagrams with both hands), I went up to him and asked him if he was indeed the author of that book. He was amazed and asked how I knew of it – and then asked me to bring it in, which I did. At which point, he examined it closely and then said: “As far as I know, this is the only copy of my book in existence”.
What had happened was that he had just been appointed head of a major neuroscience institute in Frankfurt, recognized to be a very brilliant man. They were not Jewish, but as Hitler grew in power, they decided that they didn’t want to carry on living in Germany and emigrated to the United States, ending up as an Assistant Professor at Western Reserve. But because of the way they left – pretending to go on holiday and not wanting to take possessions such as his book, which might give the game away – he was not able to bring a copy with him. Meanwhile, the Nazis, because of the way he left, destroyed all of his books.

Gerald Graham, born Gerd Greiffenhagen, tells his eventful life story lightly. He emigrated first to England, then to the USA with his parents, and then to the UK again, in the McCarthy era.
Emigrating didn’t solve everyone’s problems:

When war first broke out on 1st September 1939, very little happened for a while. It was called the Phony War. During this period, the British Government found itself with several thousand German Jews about whom it knew little. How could it be sure they were not Nazi informers? It decided to intern the lot. They were in fact legitimate Jews, including professors and musicians. Some were sent to the Isle of Man and others to Canada and Australia. Ernie, who had volunteered to join the British Army, but was interned instead, was sent to Australia on a small ship. The “Dunera”, embarked on 10 July 1940, with 2,542 detainees, all classified as “enemy aliens,”. They included 200 Italian and 251 German prisoners of war, as well as several dozen Nazi sympathizers, along with 2,036 anti-Nazis, most of them Jewish refugees. The British crew of the ship understood nothing of the politics and circumstances of the Jewish group and, when the Nazis started to fight with the Jews on board, the crew took the side of the Nazis. They had terrible fights over about six weeks on a daily basis. As well as being dangerous, it was of course incredibly upsetting to have escaped to England and then to be placed at the mercy of those they had escaped from. Ilse remembered the case of one aged Jewish professor, whose manuscript – his life’s work – was thrown into the sea with a laugh by British crew members. The moment they got to Australia, telegrams were sent and it became known to the authorities what had happened and there was a debate in Parliament about it, with the Government fiercely attacked for allowing such a thing to happen. Steps were taken to have the Jews sent back to England. 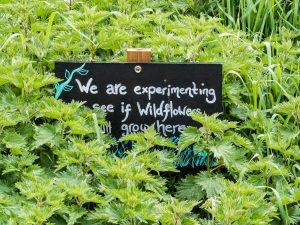 Strafakte.de reports on die badische Aktenheftung as something historical. I have heard about this before and I suspect it’s still partially alive. In Baden, a special method of binding documents and bundles of documents has been in use since at least 1801 and they are sticking to it. Some more in Wikipedia, and more pictures. You need a special hole punch and also a bodkin/bodger to create tiny holes. 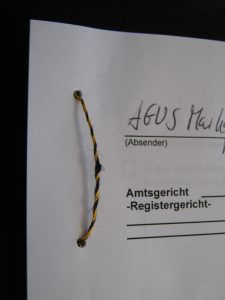 There was a famous case in 1970 when the court in Baden tried to refuse files returned from Cologne without the right binding. 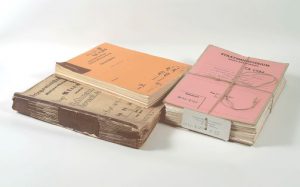 This made me think how many local peculiarities live on in various parts of Germany – when you learn about the law you would think a lot of it is uniform. And 1801 or earlier does somewhat predate the existence of Germany as a country.

When I was training I learnt how to sew documents using green tape. These things are so much harder to photocopy that I wonder how often it is still done. But you can find information online so it is not quite dead yet.

Sewing together a legal document, from the Legal Secretary Journal.

A YouTube video in which Maria shows how to bind legal documents – interestingly classified as Comedy.

The article reports that ‘moves are afoot to dethrone London as the preeminent dispute resolution hub.’ We’ve been here before – attempts to set up English-language courts in Germany were linked to a German campaign to sell German courts to international litigants. But Brexit was not part of the mix then. It is reported in the SJ earlier:

The Rolls Building is to be rebranded the ‘Business and Property Courts of England and Wales’ from June of this year in a move to shore up the jurisdiction’s reputation post-Brexit and to enhance the connection between the regions and the capital.

On 30 March, ‘Justice Initiative Frankfurt’ was presented to German lawyers, judges, and business leaders with one aim: to attract more financial disputes to Frankfurt at the expense of London. The initiative launched by law professors Burkhard Hess, Thomas Pfeiffer, Christian Duve, a partner at Freshfields Bruckhaus Deringer, and Roman Poseck, the president of the Frankfurt Court of Appeal, is backed by the federal state of Hessen’s minister for justice, Eva Kühne-Hörmann, and will look to take advantage of the uncertainty surrounding the UK’s legal services market post-Brexit.

The link to Justice Initiative Frankfurt is to an English translation of the position paper.

The SJ has a Simmons & Simmons partner, Ed Crosse, who thinks English courts will continue to be preferred internationally.

‘When designing new procedures, the Frankfurt courts, like many others such as the Singapore International Commercial Court, will undoubtedly select what they perceive to be the most attractive procedures used by other jurisdictions and avoid those that are receiving criticism,’ explains Crosse. ‘We cannot be complacent about such matters.’

I have no idea how flexible the Frankfurt courts can be in choosing their procedures. The position paper quotes the German Code of Civil Procedure in the ‘official’ version not always popular with me.

There’s something about this on a blog new to me but which I intend to follow, Dispute Resolution Germany, by Peter Bert. He wrote about the subject on March 15 but perhaps he will return to it:

As much as I would like to see more banking litigation moving to Frankfurt, in my opinion, one very important factor will be the governing law: Unless the underlying contracts and financial instruments are governed by German law, it will make little sense to agree on Frankfurt as the venue. Parties, on the other hand, will only agree on German law if they have confidence in the courts. In my opinion, an effort must be made to align Justizinitiative Frankfurt, the Law Made in Germany project and the English language in German courts legislative initiative. So let’s see what is going to be proposed on March 30, 2017.