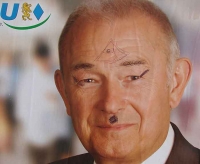 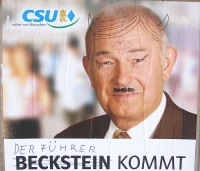 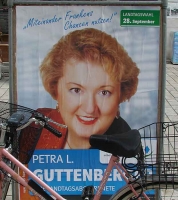 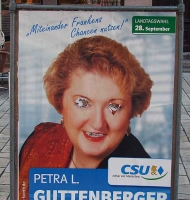 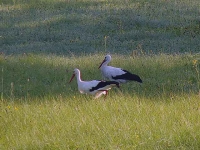 As a result of pressure of work, this blog may have to descend into photography for a day or two.

That’s an imperial cup and teaspoon, is it?

Just because we have popcorn on the brain, we thought we’d share one of our favorite popcorn recipes. It’s sweet, salty, spicy, crunchy…and in imperial units. Sorry about that, but it’s from the archives and not yet in metric measurements.

I can certainly confirm that they aren’t metric. But there’s too much to this:

U.S. customary units, also known in the United States as English units or Imperial units (in reference to the British Empire)[1] (but see English unit for British standards) or standard units, are units of measurement that are currently used in the USA, in some cases alongside units from SI (International System of Units — the modern metric system). All units are defined in terms of SI base units, but at ratios inconvenient for conversion.

I suppose that means even Butterstick has an imperial element.

Kanute/Kanutin – canoeist – nothing to do with Knut or Canute.
Wasserball – water polo – makes more sense, I suppose, since there are no horses involved.
Turmspringen – (high) diving – German distinguishes between Tauchen for underwater diving and Springen for diving into water
Springreiten – show jumping
Vielseitigkeitsreiten – eventing
veredeln – Edelmetall means noble metal, and a highjumper, for instance, who is sure to win the bronze medal but then improves and gets silver or gold is said to have “veredelt” the bronze (turned it into silver or gold).
das Treppchen verpassen – to miss the podium
Speerwerfen – javelin
Fünfkampf, Siebenkampf, Zehnkampf – pentathlon, heptathlon, decathlon
but Triathlon – triathlon
Florettfechten – foil fencing
der Turnfloh – the gymnastic flea (Florian Hambüchen)

I reported earlier on criminal investigations against Americans with doctorates who dared to call themselves Herr or Frau Doktor in Germany.

Now it appears the Kultusministerkonferenz has got its finger out and relaxed the rules. I may call myself Frau Doktor Marks instead of the previously permitted Frau Doktor (London) Marks.

With the criticism building up about the destruction of London for the 2012 Olympics, this could be a great benefit.

This is now binding in most German Länder.

TransatlanTicker has an entry – scroll down to Nachtrag for the 01.07.08 update (I think that is July, not January, since the entry is in German):

Interestingly, the person who made criminal complaints against 40 academics who were using their titles was not a stickler for law, but one Herbert K., who had a 1970s doctorate from Toronto and had failed to have it recognized. He decided to change his tactics. It was only the Americans among the 40 academics who had the guts to protest and publicize the issue in the international press, so we must be grateful to them and Herbert K.

The British government introduced an up-to-date new website last week – I nearly blogged it at the time. It uses Youtube and Twitter, among other Web 2.0 features.

It now appears that it used a theme from antbag.com without acknowledging the source.

Amongst other things, Anthony from antbag.com makes WordPress themes – he gives them away for free but if someone wants to donate, they can. His work is released under Creative Commons 3.0 license, which means that if someone wants to use a theme ‘as is’ or modified in some way, they are required to credit him. A link in the footer of every theme he creates points back to Anthony’s site – this is the minimum attribution he expects, which is pretty damn reasonable.

Here’s the story from new media maze, the developers of the website. 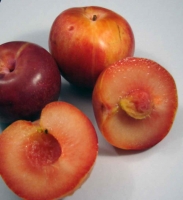 Only last week I was wondering whether I would ever taste a pluot (Pflauose), and here they were in Plus (and apparently I am not the only person to discover that).

I didn’t see the word pluot, only Brontosaurus Egg. I thought I’d better take a couple or I might regret not trying them – they look like plums, the size of the black ones from California so often sold here.

It seems, however, that they are not half plum and half apricot, but more plum than apricot. The plumcot (Pflaumenkose) is older and not so well known. There are also apriums (Apraumen).

Hot off the press, the latest racket that interrupted my work this morning. I did wait outside for a while, but Mr Beckstein did not arrive at 11.30, nor indeed at 12.00 – I gave up, unlike other interested listeners: 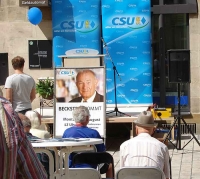 But scarcely had I got back to my office when a loud voice could be heard, interrupted throughout by a chorus of booing, whistling and chanting: 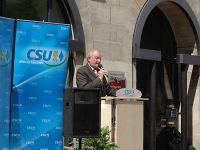 I am not sure what organization this is (Nur die dümmsten Kälber wählen ihre Metzger selber): 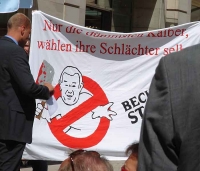 Mr Beckstein said they should listen and use their brains rather than their voices. He then accused them of being SPD. After that, he said the SPD should distance itself from them. He said they should all be ashamed of themselves as young people who had no idea how much worse off they would be abroad. Then he added that he would say the same thing to the girls (‘Das gilt auch für die Mädchen’), thus giving the impression that he had only been addressing the male protesters till then. He then decided they were from Die Linke. I decided they could not be NPD, because they were the wrong colour, but they must be a militant organization of immigrants and immigrants’ children. They all had matching whistles, and there was a brochure headed Stoppt Beckstein! 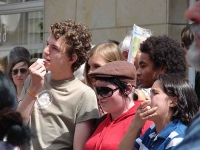 I am not that fond of what he says about immigrants myself.

But I did enjoy the Frankenkapelle Erlangen playing Hang on Snoopy (and the Franconian national anthem – melody).

LATER NOTE: The local paper reports that the protesters were from Die Linke (the left-wing party). Herr Beckstein arrived 20 minutes too late to the first of four appointments, then went to the Kirchweih at Veitsbronn, which was a late change of plans, after that had to cut out the walkabout in Fürth town centre, and finally had to cut out part of another visit on account of problems with his voice (following having to shout in Fürth because of the hecklers).

EVEN LATER NOTE: The protesters were from the SDAJ, the Sozialistische Deutsche Arbeiterjugend, who have a picture of Lenin on their site.

A slightly anonymized version of the document (Beschluss) I had to translate for the local court this week:

Something similar with KOPIERVORLAGE at Telekommunikation und Recht.

Finally, I recognize the necessity to take account even of the kind of grammatical and lexicographical advice that’s entirely incompetent and mistaken: which-hunting, prepositional paranoia, they phobia, and so on. I know someone who believes deeply that wearing white pants after Labor Day is an offense against decency, and who feels entitled to explain this to me at length whenever the topic comes up. I doubt the validity of this fashion advice, and don’t care much one way or the other in any case; but I generally (well, sometimes) go along with this prejudice in order to avoid pointless arguments. Similarly, I sometimes regulate my use of which so as to avoid arguments with copy editors. It’s cowardly, I know, but there you are.

That’s something I do in translation. For instance, I sometimes restrict which to defining relative clauses and use that in non-defining ones if I think an American is going to read the translation, even though not all Americans believe that that is a rule.

I don’t usually use they as a non-gender-specific singular, although I think it can be elegant (albeit easier to use in an original text than in a translation).

Example from above link:

Subject to this Act, every person who is qualified as an elector is entitled to have their name included in the list of electors.

I think twice before I split an infinitive.

Certain kinds of adverbs are characteristically placed before “to”. These include negative and restrictive adverbs: “not” (“To be, or not to be”), “never”, “hardly”, “scarcely”, “merely”, “just”; and conjunctive adverbs: “rather”, “preferably”, “moreover”, “alternatively”. But placing adverbs of manner in this position is now considered good style only in legal English (“It is his duty faithfully to execute the provisions…”).

I usually capitalize defined terms (the Employer, the Company), even in short contracts, although I claim it isn’t essential. I think a lot of clients, especially in Germany, expect it.

I often use double inverted quotation marks, because they are used in Germany and the USA.

Similarly, for a readership that includes Americans I write abbreviations like Mr. and Dr. with a full stop, and even Ms. (although it doesn’t stand for anything). I imagine that if I write Dr or Mr they may think, not ‘this is British English’, but ‘this translator is uneducated’.

If a text is supposed to be in British English, I sometimes use the -ise spelling, because so many people don’t know -ize is acceptable in the UK too.

Ditto avoiding the serial comma. From Get it write:

The Texas Law Review Manual on Usage and Style, considered highly authoritative in legal circles, insists on the use of serial commas, as do a number of other reputable style manuals. The Lawyer’s Book of Rules for Effective Legal Writing, by Thomas R. Haggard, says “The serial comma is essential in legal writing because it promotes clarity” (17). Consider this sentence:

Mrs. Jones left all her money to her three children: Huey, Dewey and Louie.

Without the serial comma, the sentence does not clearly indicate that the three children are to be given equal shares of the inheritance. Quite possibly (especially if Huey were a jerk), Huey would get half the money, and Dewey and Louie would have to split the other half.

(The serial comma and the -ize spelling are standard in U.S. English, but in the UK they are associated with the Oxford University Press, which happens to publish a number of widely used style handbooks, such as New Hart’s Rules).