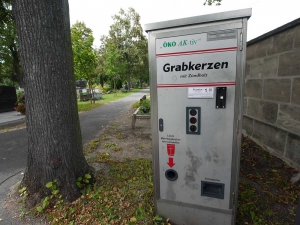 I must have realized that those red containers for lights on graves were reusable, I just didn’t know they were reused.

The Café-Bar Ruine is opposite the cemetery, so I went in for a bit. It’s great being in a cemetery with a wide-angle lens: must pop in again. 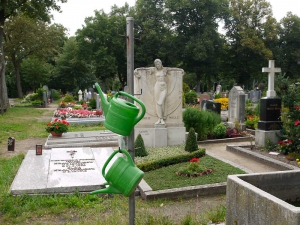 I’m tempted to stamp ‘Friedhof’ on my own watering cans, but I suppose I might regret it. 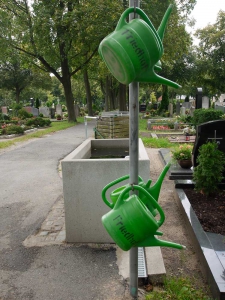 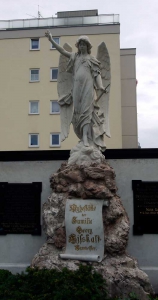 Kißkalt built this house, and I think he even lived here for a while, but before my time. 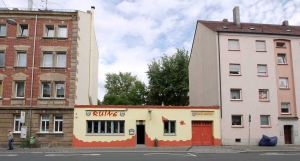 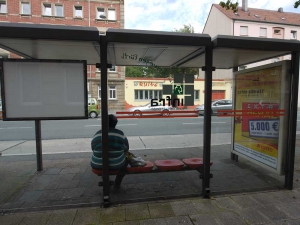 I remember talking about riots in the UK when I was teaching British background studies, starting nearly thirty years ago. I tend to the feeling that this is not what is being described as ‘simple criminality’ but has a social background.

German TV has got hold of a Dr. Alexander Clarkson, who teaches German and European studies at King’s College London (which has changed a bit since I studied and taught there), with a particular interest in politics and contemporary history. As a result the reports have seemed better informed than usual. Here’s one, but I don’t know if you can listen to the clips outside Germany. Clarkson takes the view that the police and politicians should have been prepared for problems in this area much earlier. He wonders whether violence will spread to the North-East, and is concerned about the development of vigilante groups.

The London Review of Books blog has had a number of entries on the subject.

Obiter J. at Law and Lawyers on what is permitted by law in defence of property and Who will pay?

Helen Graves on Why I Love Peckham

I haven’t seen it yet, but on amazon you can look at some pages. The pages I saw looked identical to those in the second edition. (Ah, but it probably was the second edition! you have to be careful with amazon) The (new) legal writer says it now cites its quotations, which will be good. And the publisher says there are 800 new entries and new senses of existing entries, more on immigration and intellectual property, and more on British usage. And:

Influential writers and editors rely on Garner’s Dictionary of Legal Usage daily. It is an essential resource for practicing lawyers, legal scholars, and libraries of all sizes and types, functioning as both a style guide and a law dictionary, guiding writers to distinguish between true terms of law and mere jargon and illustrating recommended forms of expression. Common blunders are discussed in ways that will discourage writers from any further use. The origins of frequently used expressions are described with engaging prose. Collectively, there is no better resource for approaching legal writing in a logical, clear, and error-free way.

Personally I don’t look at the 2nd ed. daily. I’ve found it very useful for detail on the ‘shall’ problem. It does contain a lot of stuff I don’t use, such as which of a pair of words to use (‘en banc; in banc; in banco; in bank’; ‘oblige; obligate’) so I suppose some people use it as a style guide, and certainly the 3rd ed. may be better for UK writers there.

This is the kind of thing people want to avoid: 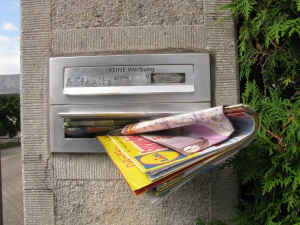 I wrote about Downton Abbey and the entail before.

Now there is a fuller treatment on Law and Lawyers.