The most striking posters are on the main roads leading to the motorways. 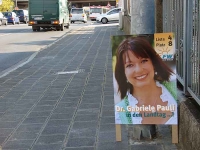 The Republikaner must have resented the NPD taking their topic:

This is a rather inappropriate and outdated poster – it says ‘Your decision’, but only one of the three parties named can be voted on on Sunday: 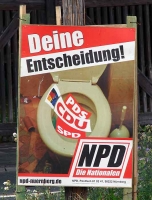 This is what may happen if you don’t buy your medicines in a German Apotheke:

And this is what may happen if you stand as a CSU candidate in Fürth: 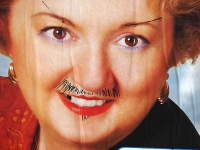 No. 1 (unblemished view in earlier entry): 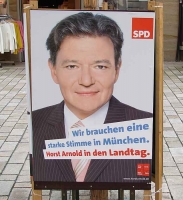 3 on September 19 (I suppose that white space was asking for it):

4 On Saturday September 20, when the campaigners were out again: 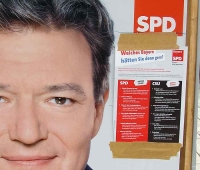 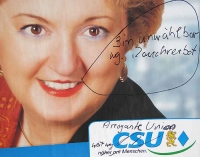 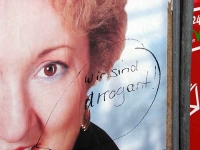 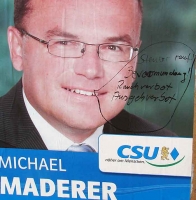 And finally, here’s one that is too high to be easily defaced. It shows signs of photoshopping – Bavaria, the place where the sun shines from at least two directions at once: 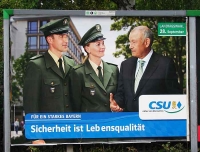 I prefer the third one, which is from the Bundesjustizministerium. They might write ‘modernize’, but a lot of people seem to think ‘ise’ is de rigueur in the EU. Did the first two really confuse Recht with Gesetz, or was it an earlier title?

The German Law Journal has a special issue on the topic (no. 9 for 2008, if you read this later).

One of the probably most groundbreaking – and at the same time also most contentious – issues of the German reform of private limited companies by the Gesetz zur Modernisierung des GmbH-Rechts und zur Bekämpfung von Missbräuchen (MoMiG – Law for the Modernization of the Private Limited Companies Act and to Combat its Abuse)[1] is the introduction of the Unternehmergesellschaft (UG – Entrepreneurial Company). This new sub-type of the Gesellschaft mit beschränkter Haftung (GmbH – Private Limited Company) is specifically designed for entrepreneurs and has already unofficially been dubbed the “Mini-GmbH” and “GmbH light”. It can be seen as the centerpiece of the legislator’s overall aim to facilitate and accelerate the formation of companies and the underlying motive of increasing the international competitiveness of the German GmbH.

I’ve mentioned Suzanne Balansat-Aebi before, but I only recently encountered her article/paper on translating English-language contacts into German.

The link on this page opens a PDF file.

This is an excellent introduction to the subject. The fact that the target language is Swiss German should not cause insuperable problems.

In contrast to German contracts, English contracts are long and wordy. I know one German translator who always translates contracts into English, because German contracts are so much easier to understand. that’s mainly because continental lawyers rely on codified law to fill in the details. In common-law countries, in contrast, everything including the kitchen sink has to be thrown into the contract: by the parol (= mündlich) evidence rule, nothing outside the contract can be regarded as binding.

Possibly the biggest problem is what to do with legal doublets and triplets in German. (Legal doublets are a topic for a future separate entry!).

Many doublets are genuine synonyms, so only one word is needed in German. Examples given here: warrants and undertakes; indemnify and hold harmless; cancel, annul and set aside; a right, title and interest.

Unfortunately, the terms are not always synonyms. And in the worst case, the translator wonders whether they have slightly different meanings, and if so, what those meanings are. Even the drafter may not know. Some of these terms have been discussed by the courts, but how much time can we spend on research?

The organizers work together with HarperCollins, the National Trust, the Open University and Michael Birch of bebo.com. You have to belong to youtube to post videos there.

It looks to me as if it could have started at the Edinburgh Festival.

The word of the day is alopecia.

In honour of the day: how to talk like a German pirate. 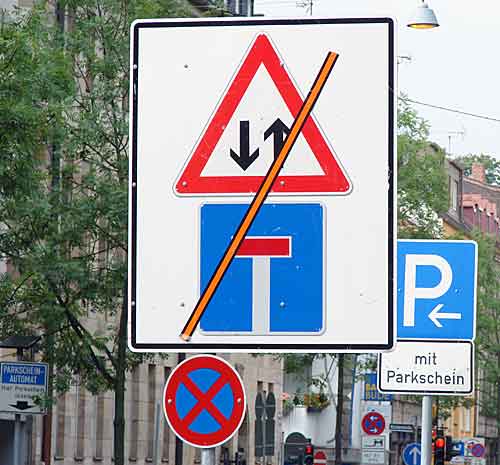 You have to have lived here for a while before you can understand this kind of thing.

I’ve added to the blogroll love german books, a weblog by a translator in Berlin. Good links to sites on German books, their translators, literary prizes and so on.

I mentioned Charlotte Roche’s bestseller Feuchtgebiete earlier. It’s now being translated into English as Wetlands, by Tim Mohr, who is apparently from New York and spent six years as a DJ in Berlin (for more, see the weblog love german books).

This was mentioned in two weblogs I follow, by Werner Siebers and Dirk Nolte, who both quote the Swiss source 20minuten.ch, which in turn quotes Bild.

Bild has a list of terms for which an English equivalent had to be invented. I’m not sure why Perlenrüssel (clitoris) should not become pearl trunk but snail tail. And Hahnenkämme for inner labia translated as dewlap – a term usually applied either to cattle or people with huge double chins – is extremely bizarre.

What really led me to add another entry to the heap, however, was this text on the Swiss site:

Do the Swiss not distinguish between vagina and clitoris? Or have I missed something in my education?