Fürth is slowly gearing up for the election campaign (it’s still the middle of the school holidays in Bavaria): 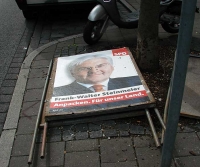 A party for me: 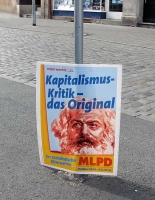 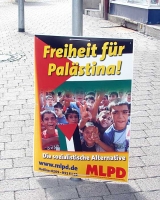 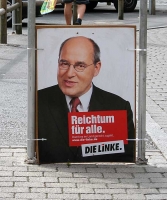 On the way out of town, where it’s harder to reach the posters and deface them, the NPD has VATERland, MUTTERsprache, KINDERglück.

There’s been a lot of criticism of Facebook’s use of crowdsourcing in translation and desire not to pay translators.

Now it appears that Facebook long since applied to patent this method.

An article in Fürther Nachrichten (with photo) describes the planting of areas like traffic islands here with a mixture called Silbersommer. These are plants that like it dry (and this is a particularly sandy area) and stand up to traffic fumes.

The first time I saw them I was thrilled. But after I kept seeing the same plants out of the car window again and again, I stopped enjoying them.

I gather that the plants flower at different times. But I keep seeing yellow yarrow (Schafgarbe) in place after place.

It appears that more plantings are planned. It seems to be a nationwide initiative that was tried out for five years as an experiment.

Silbersommer with pictures and PDF.

DIY Silbersommer for your own garden (German).

Guerrilla gardeners would be nicer.

Eulita, the European Legal Interpreters and Translators Association, recently conceived, is being founded and having a conference in Antwerp on November 26-28. It does look good, although I don’t know how far it’s specifically for EU translators.

OK as long as one doesn’t get one’s Eulitas mixed up with one’s Euletas.

The Panopticon is a type of prison building designed by English philosopher and social theorist Jeremy Bentham in 1785. The concept of the design is to allow an observer to observe (-opticon) all (pan-) prisoners without the prisoners being able to tell whether they are being watched, thereby conveying what one architect has called the “sentiment of an invisible omniscience.”

A forerunner of Wolfgäng Schäuble, perhaps.

I remember seeing Jeremy Bentham in his glass case at UCL in the 1960s. Now Konstantin has published an entry and a picture. I had no idea that they’d wheeled him out to attend committee meetings twice.

This might be by the jurabilis…! people as it has this as its first blog: 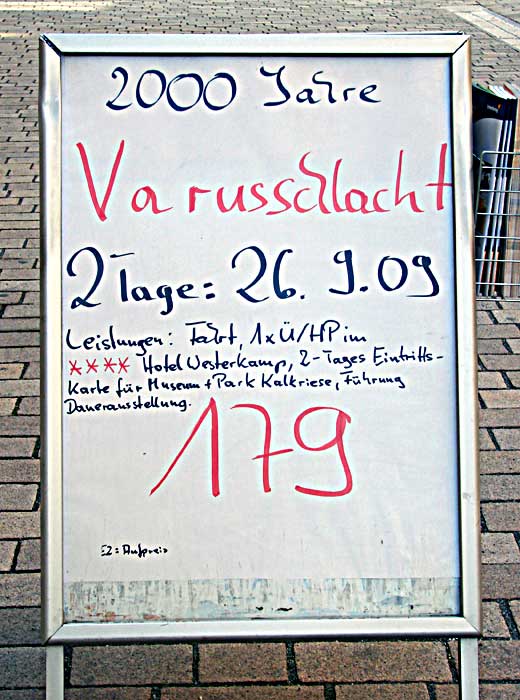 I actually translated a booklet on Kalkriese many years ago. Kalkriese as the location of this particular battle is now a subject of scholarly dispute.

Wikipedia on the subject.

I rather enjoy Goethe’s Die Wahlverwandtschaften, but I don’t know how it would come over to an English reader new to German literature of the eighteenth century.

In Elective Affinities Goethe conducts an experiment with the lives of people who are living badly. Charlotte and Eduard, aristocracts with little to occupy them, invite Ottilie and the Captain into their lives; against morality, good sense, and conscious volition all four are drawn into relationships as inexorably as if they were substances in a chemical equation.

There have also been translations by R.J. Hollingdale and H.M. Waidson, and others. It’s the Waidson translation that is reviewed in the Observer today:

The translation is good but suffers a bit from the awkwardness of German syntax and Goethe’s very formal style, which can make this new edition seem a struggle at times.

One likes to see the translator acknowledged, but this is odd. And note that ‘new edition’ means ‘1986 translation’.

I used to have a picture of a catladder at a prison in Bavaria – it led into a first-floor cell. I can’t find it to blog, though. So make do with this blog of pictures of catladders.

The second MDÜ article on legal terminology is by Monika von Kurzynski and Anne-Kristin Langner and comes from a BA dissertation done at Hildesheim University. It’s about the differences in legal language between Swedish, German and English judgments. Unfortunately, it’s not really about terminology. It discusses the macrostructure and microstructure of judgments, puts the judgments of the three countries on a spectrum from abstract to personal, and considers the influence of the EU and the internet on judgments (the last two seem difficult to make generalizations about). Apparently the dissertation was based on three judgments of appeal courts, one in each language, but those judgments aren’t named, nor is there a bibliography. On top of all that, I wonder if this started out as a Swedish-German comparison and England was added to spice it up – but perhaps I’m doing an injustice to the university. At all events, it is not terribly well-informed about English judgments and English law. For example:

There’s a bit of a contradiction betwee von Fall zu Fall and auf Grundlage von Präjudiz(i)en. It isn’t mentioned that England has statute law; its law is referred to as ‘gesprochenes Recht’.

It’s not easy to deal with three legal systems in a short treatise, because it’s so hard to generalize when one’s knowledge is limited.

The third article is about terminology, law and justice in South Africa and is by Anja Drame. This does have English and French summaries and a bibliography. South Africa, it says, has eleven languages recognized as equal, but only two of them have in the past been used for writing about law. As for the others, the African languages, they do have legal terminology, but it may differ or overlap, and documentation is in a problematic state. This is all interesting, but it leaves me feeling grateful I only have to worry about the difference between common law and civil law.